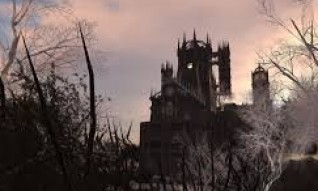 I felt cold and sensitive, waking up after the long lasting sleep. My skin, eyes, hearing, everything felt so revived and superficial! A strength I never felt before overwhelmed me. I was hungry. I jumped up desperately looking for something to devour on. Then I realised, I was actually. . . THIRSTY! And it wasn't water I sought but something else. . . something sinister!!

Met Maya at the newborns' meet. Remember that mutual help stuff I told about? Guess what? She is the hottest girl in the vamp community. No wonder she got a ton of attitude. Funky vampires! She is 18, and did someone say we got a dead heart? Let me tell you, I never felt more alive.

31 newborns in our community and 17 young boys, 9 hot girls. The youngsters love late night parties stuffs. And late nights often brings the vicious fangs from an outlaw. Vampires are growing in numbers. A sinister race in the mist of humanism. But no wonder we are a society by definition.

I am sitting here holding a cup of premium mountain lion blood sample. Sounds exotic? Well I am enjoying it whatsoever. It's an hour past midnight and the wolves are howling with madness. Did you ever know that vampires are allergic to this? I mean the enchanting music of the canines. Engraved on some bloody pages of our history are a few mysterious vamp chronicles confidential to our own realm. And rumours are that we are not the only race that may seem alien to the humen.

Hey something extraordinary has happened today in my life. I got to taste the true power of a vamp for the first time. It was the physical practice time when everyone did bits of vampire workouts in the open field a mile away from home. Muscular Lahon showed how strong he is by throwing an almost thousand pounds rock to a distance of fifteen meters. Mikka's fleeting feet dashed across a hundred meters in just almost two seconds! It was supernatural! When it came to me to show what I got, I bagged a four seconds record in the hundred meters sprint. Weight lifting was the harder part, I hardly managed to lift the thousand pounds rock an inch above the ground. But even then, it was an incredible experience and the power I felt in me was titanic.

Patrick says I'll need more practice to uplift my vampire capabilities. Pushpa encourages me to meditate for inner peace. She says the vamps need to do it, especially when it is a newborn.

It's the Republic Day for India. I can remember the school parades, those chief guests, the tri-colour, everything so lively. Patriotism in me has been replaced now. Replaced by clan sentiments.
The Covenent has arranged a guild to be formed and managed by the local vamps. Every vamp family needs to participate with at least one member in the guild. Lahon and Mikka have joined it. There are hundreds of members, they have said. The guild's first meeting will be held on 30th January. It's sole reason of existance is to try holding back the outlaws and dispose them off their cursed lives. I am not allowed to join, no newborns are. But there is something new coming up for every newborn in the province. A newborns' meet for mutual assistance! There are more out there and so not only me. I am looking forward to experience it.

Lahon says I am almost ready to join in the humen society once my thirst for the kind completely subsides. But before that I need to learn every bit of vamp customs and traditions. Pushpa is helping me a lot with those things. 'Vamplore' is a history of the vampires throughout the ages. I need to finish reading it. Having a tough time taking in the culture.

Lahon and Mikka will be accompanying me on a hillside track tomorrow. Feels different thinking about a track for vamps.

The Vamplore describe about more mysterious creatures. Pushpa said the modern vamps have no proof about them and are just myths, except one. Except one? She said she would explain later.

My guardians, they are five in all. The eldest is Patrick, a South Indian, the most able male of our family. He was transformed at the age of fifty, thus his older look. However Lahon, a younger looking vamp in the family, says Patrik has lived for the last three hundred years making him undoubtedly the most experiended. Lahon, an athletic North Eastern aborigin of India has been living for the last seventy six years and seems still in his thirties. The other three are Pushpa, a hundred and sixty years old Rajasthani woman seemingly in her forties and Patrik's 'after transition' wife; Mikka from Punjab and his wife Zoya from Kashmir, both in their apparent twenties though they have been living for the past four decades. And the sixth vamp in the family is me, Riyan, a Catholic Christian from Goa, seventeen of age, transformed for the last three months, living in conditions never known to humen, conditions those are more than reality but lesser than fiction.

They don't believe in us. The humen. Western festival 'halloween' mocks the existance of the vamps. But the truth is that we are all over the world, spread out in thin collections, and so does the outlaws. Humen disappear without a trace, cover up stories follows about trafficking and abductions, we stand there silently behind the curtains either covering and clearing up the scenes or creating another. It is necessary to keep the incredible truth about our existance hidden from them because they are god lovers. Then comes in the Covenent. They have investigators who tracks down the responsible outlaws and disposes them off. But the culprits are no less organised. They never fail to retaliate back provided they are twice as powerful as the civilised vamps.

Vamps have neurons but varying from that of humens. It's not blood that flows but another organic fluid substitute that functions in our body. Strange but true, nature has created a dangerous hybrid species. A few had gained self consciousness and thus became social. The contrast with its own kind had created the diversion that led to socially and biologically different sub-species, and thus with different norms, leading to a neverending battle for triumph. This is an awkward world for me and I still can't get over it.

The guardians owe a cattle farm. It's not actually for business but for blood farming. That's what keeps my kind alive.

The meeting is over. The talk was all about the unfolding events in Dehradun. People were disappearing and the outlaws were responsible. Some of the newborns were never found, no doubt they turned into the humen hunters after their transitions. They say it takes twelve hours to complete the process of change from human to vampire.

The guardians have warned the other members of the household not to step out at nights. The consequences can be fatal. Days are safe, for both vamps and humen, since the outlaws can't survive under the sun. The heat of the sun is too powerful for their mechanism. Whereas, vamps can survive too well in sunlight. They have mingled with the humen and their society, undetected and unknown for the past generations. But indeed, newborns take time to get into. Human blood is just unavoidable for them. And once they get to taste it, they don't turn back but join the outlaws inevitably.

One of the Covenant's elder members have flown in to Dehradun from London they said. Somehow things have turned out of control in our place. Outlaws were increasing and transforming humen, myself a victim. Either newborns were caught and handed to guardians or they just join the group of nasty outlaws.

On 6th January, two vamps were caught and beheaded by a gang of outlaws. Human blood had given them incomparable strength. Even the elder members from the Covenant have to rely on modern tech to capture and kill these animals. They contradict the civilized race of peace seeking vamps.

I'll have to continue later. The guardians are having a meeting at the common room in five minutes.

This is the first time I had such a strong human scent closer to me after the transition. My natural evil wanted to stalk the vulnerable prey, kill it and drink from it. But 'unfortunately' the Covenent disposes(behead) off every vamp who disobeys the codes to become humen hunters. My guardians(every newborn is allotted) keeps me content with wild blood. They are strong, as much as I am. But they are more cultured and less animalistic unlike me. We have the stronger vamps, the humen hunters. They grow strong but unrully, the addiction poisoning their brains. Either they are disposed by the Covenant or they keep escaping from them. Often, clashes happen in the nights between the two species. It takes four to five vamps to capture an outlaw(the humen hunters). They got power, the Covenant's vamps got brains, thus tech, though without blood flowing through its veins.

It's the new year. The town had celebrated with splendor. But for my kind its just another set of days and weeks ahead. Does time matter to you when you have milleniums to live in future? Time is but now a never ending collection of happenings, devoid of ample meaning. My pioneers are teaching me to cope with my thirst. They want me to stay away from humen. I know how impossible it seems to me, myself a newborn, full of vigour and SPITE!

This is my first post in my Diary. I never recently thought I could recollect my composure back, at least some of it if not all. The sudden turn in my life had left me craving with an evil thirst. These blood sucking fuckers had bestowed an incurable curse upon me and now, I am doomed to be a Vampire.