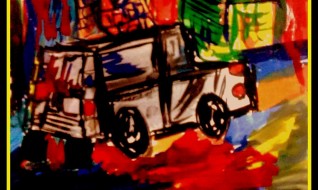 To click a picture or paint a vision or play around with words. That's what i like to do! Its amazing how expressions can be myriad and yet never fail to enthrall.

After the looong gap,i put some thoughts to words on this platform. I've been constantly getting mails from writerbabu on the missing diary entry, well just so many ups and downs to keep me from being expressive. It is quite true when they say worry is a misuse of imagination..
But it seems inevitable to me! And just to validate the cliche,i observe things that add on to the existing confusion. After the much upsetting December rape case where literally all of the Indians had an opinion about and it grew into a fierce tornado (that only settles down with time) I am still vaguely opinion-less. I mused upon it, to the extent that i got further befuddled.
Why are gender centered disciplines, courses still taking a back seat? After all if that is the need of the hour, shouldn't the subject be elevated from an optional to a compulsory stature?
Again, the nature v/s nurture debate will never die. Some say that sex differentiation is aced by the gender construction while others swear by their idiosyncratic approaches. Opinions ranging from attire for provocation to dietary patterns to westernization are myriad and evergreen implying that the bone of contention is the incessant thought!
That takes me back to the thoughts that ran across my head during the day, while taking the bus back home, i wondered why the ladies were reserved a seat on the left side of the bus.. could that possibly have a reason?
Why are the chefs only males out there in all the restaurants and contrasting to that, females back at home? And if i suggest a role reversal would that make any sense? wouldn't it go back to square 1 of inequality?
I don't know if the change of a thought process means understanding humanity and nature as was probably understood by the tribes in the primitive epoch or a super deluded vision as is chanted by the contemporary times.
Yes! by the end of the post, i still haven't formed a staunch opinion. But i would like to suggest a movie called, "The gods must be crazy" It might stir a few emotions and sensibilities if not help in forming a thought to stand by!
I am still worried.

Adding to my intensive curiosity, Religion is a main subject in my course this sem. As we read about the invention of religion, its a progressive thought, only that it confuces me further rather than answering my existing queries.

It makes me wonder, if religion has been manifested by man himself, how can the dogma be so plaguing that it continues to be mindlessly yapped generations after generations.
We read about how the period of enlightment was a benchmark in history, how rennaisance effected the world over and how mechanisation and industrialisation have aced our lifestyles vis a vis the primitive societies. But have we reached any podium of modernisation or the so called rationalisation that we proudly call a concept of our age?
The entire arena of communalism and secularism (flawed) today, would be prove my point.
Ask the kids today, and you'd be amazed with their conception of religion. well, no point blaming them, it is but what they see and hear around!
I donot see any difference, rather the primitive societies seem to be more bounded. Let alone the privitisation v/s globalisation debate!