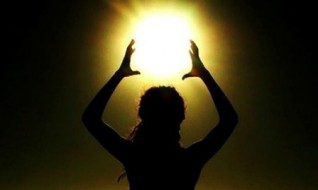 life's very interesting, we are having so many questions, complaints to our present situation...

Like we all know, nobody is completely happy or fully sad in this world... life's a mixture of happiness and sorrow... tht's the reason y we are born as "human Beings".. if we are having all good deeds thn we will be in heaven, if all wrong deeds obviously hell gate is open..

Just shut all your practical surroundings, close ur eyes and think about the structure of this universe or the whole creation..

Every species equipped with billion of living beings.. like humans (6 billion in polulation)

"BILLIONS OF UNIVERSES EXIST" and EVREY UNIVERSE HAS ITS OWN SET OF LAWS and NATURE and PEOPLE :D

have u folks ever wondered how much big is this creation or how much small is the creation..

In string theory, strings are considered to be the smallest particle than atom.. Just have a look at DNA (Deoxyribonucleic acid) that forms the body, it contains all set of information or say data responsible for the development of the body n brain.. half set comes from mother n half frm the father.. Interesting..

Even then some people say nobody created this universe.. then who's maintaining the all this??

who's responsible for the rotation of planets, stars galaxies even the universe.. who set the law of this universe that it will created with five elements, who made t

Lets take one more step towards finding the reality in spirituality.

have we ever wondered why we have got this human frame??? A frame composed of mind, matter, blood, flesh n bones.. a complicated structure that forms inside a womb in nine months... a structure that took millions of years to be modified into intelligent human frame..

Now question arises, what holds all these elements togther inspite of being opposite to each other.. Why the body starts decompossing after death..??

Some scientist says, that we are born or the universe come into role without any higher authority or creator.. Our existence is a stage to stage development..

wow.. interesting ha.. nobody initiated this automatic process... nobody is maintaining the rotation of sun, earth, moon, stars, galaxies, even the life..

Even the LHC (large hardon collider), made with thousand of scientist and years of time n effort to detect the higgs boson particle or the god particle, which is responsible for the development of this universe.. Still with many hits n trials they are trying to find out the core secret.. how can those few scientist says that everything is just an automatic process.??

well its requires 20 years of contineous study to get a grad-degree, but we are trying to solve the secret with maths equation and machines, come into conclusion in secs that nobody created this universe.. Still we havent colonise the moon and mars.. living n struggling on this planet earth.. still we are unable to detect the T-sunami and earth quake to exact point, stopping it far away at this point..

Anyways In coming few days I will reveal the exact path to achieve the secret and spirituality... :)

I am not gud in writing skills so gonna use the simple english.. :))

Lets take a tour on spirituality.. :)

life... Breathing, Body, Mind, Illusion, Reality, Versatile, what is life... what its all about... we may find so many views and facts regarding to it. But hardly we reach to a definite conclusion. :D

God.... invisible, nameless, formless, speechless etc... At least we can capture the god either in heart or in temples.. :)

Death... Certain, Punctual, Reality etc... Now its realy horrific to think or write about it.. :(

well these are some of the basic question arises in our mind, especialy those born with some exclusive senses.

In our daily routine, most of us don't even bother to think about life, love, god and of course death. we are so engrossed in our daily chores that we are unaware of the basic principle law and purpose of the creation.

Interestingly, everything in this world or the creation is inter-linked to each other. we can find so many clues around, that clearly motivates us to think about life, love, god n death.

All of these are beyond our regular senses.. beyond debate..