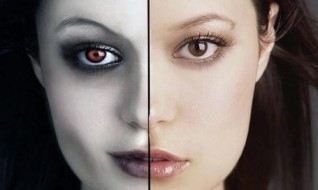 The Pig or the Wolf's Diary

This is the story and life of a young lady struggling with the second person living inside her. Living with a constant voice and breaks of personality. Pig or Wolf, she can't really be sure which one she is.

Yesterday the little pig came out and spoke to my ex... she said she will do anything in her power to kick him out of my life... he just stood silent staring back at her, knowing she wasnt lying...
Me, I'm not sure I want him out of my life for good, I still do love him and probably will love him all my life, but he doesnt seem to care for my feelings at all, always steppin on them, I know the pig is right this time, but honestly I dont think I am strong enough to keep up to her words.

Dear readers, I havent write since a few days ago I know, but I've been feeling down and with no inspiration. My ex and I, arent talking to eachother anymore. I asked for him to stop talkin to a girl in particular because it was bothering me, it had been for months, we play online (or used to at least, cuz he isnt in my friendlist anymore) and he used to only play with her, never invite me, go on skype with her and didnt let me know, even all of that I could handle, but they would chat on fb when he doesnt even take the time for me, he would lie to me about her and she would be a bitch to me too, ignoring me, and just overrall being mean.
She isnt "competition" per say, she is a friend's girlfriend and I told him from start, please dont be friends with her, because from day one she was not nice to me, and did he listen? of course not, he did not only become friends with her, they talk very often and that makes me feel second. I know I'm not his girlfriend anymore, but after 8 years of love you would think he would stick by my side... well, he said he didnt agree on that and since honestly that has been killing me, I decided I will not speak to him as long as they have such a close friendship.
Is probably wrong of me to do this, but he never showed me that he cared, and you know the worst part? when my friend and her brake up (becuase they will... they dont even get a long and they have been together for like a year only) he will have to stop talking to her to stick with his friend, but he would do that for him, not me.... its ok. I'm better off like this, feeling unappreciated is really sucky, and I wont let him do that to me.

I sometimes feel I'm the only one that doesn't remember what she does...
Yesterday I saw my ex.... and even tho I should be over him, I'm not... and after arguin, I dont even know how we got there and I made him text a girl I hate to tell her they will stop talking becuase of me...
I come back to that memory now and I say, I wouldnt do that... Its embarrasing just to think back on it... This little pig inside me is driving me insane, she just comes out of my head and takes control to make me look like a witch, then she leaves and I'm left alone to deal with the consequences... my ex isn't mad at me, of course not... he knows I do this shit... I just change personalities and then forget what I did... I can't recall how exactly I got there, but I know I did it...
Oh, Im insane.

Are drugs really that bad? Everytime I need conform I just turn to one of them... I cant really say I only do one, but I can say I'm not addicted to any of them. Ok, one, but it is legal at least. Tobacco.... I just sometimes feel like anything that is ilegal means it doesnt fit to the normal/average human thinking, and honestly, I wanna be a part of whatever that is. I'm so sick of life. Sick of humans, if I ever had a change to extermine a race, it would certantly be human race I would go along, I dont mind. Because I honestly see the world everyday and think to myself, wow, we really are a fucking desease, we are killing our mother, our home, our ownselves.

The other day I saw some old friends when I was back in highschool. I had lost that life already, I hadnt seen them in such a long time, they werent classmates or anything like that, they are at least 6-15 years older than me, and I used to go there when I ran from highschool or simply when I wanted a break from my sickly life. I wasnt even 18, probably around 16, I had broken up with my long term boyfriend, that break up didnt last long, probably around just 6 months, but they were the craziest 6 months of my teenage years, it all changed for me there.
I was dating another guy, from that house, might sound crazy but that place is some kinda private club, always the same people, always with invitation, but then again, always there.
This guy is 7 years older than me, up to now I still keep in touch with him. He is a, amm... interesting guy. Cant really say, nice guy, because he really wasnt, but in that house, nobody was.
I was somebody else there. I was the pig. Always mean, always on drugs, always laughin at life and playing with religion. I used to have sex in the next room with my friends partying outside, with this 24 years old male making me scream loud. ah, and I forgot to mention. this guy, was a cop.
I remember I used to ask for him to put the uniform on and he would cuff me and we would role play. It was hot for me, and of course it was hot for him, being an officer of the law fucking a minor on drugs.
You would think I'd feel bad now that I think about it and I wouldnt be proud of what I did.... and maybe I did. Thats why I had left those friends behind, but now I'm back. The pig is out again. And I love it.

Let me just start by adding to the equation that I had an 8 years long relationship... It started when I was 14... he was 15, turning 16. It ended about 5 months ago. As u might know, I'm not quite over it yet. It was my decision, and up until now I think it was the best decision I could take.
It was a wonderful relationship. He was very sweet. And after being a hateful child who believed in no love and had no trust for anyone, this sweet boy came up to my life and made me believe. I wasn't allowed to have a boyfriend, of course... but I didnt care. He pushed for me, said he could make me happy and didn't care I wasn't allowed to have a boyfriend, we could sneak and see eachother once a week. It all seemed very romantic, and childish, looking back on it, but I said yes.
It's over now. The fantasy was all that was, fantasy.
Today I said to another guy that I loved him... only after 2 month. It all happened so fast... I knew him from the past 3 years or so.. but I never thought this could happen... more importantly, all so fast. It all seemed to fit into place... he would know what to think and what to say, always coordinated, always perfect... and it took me no time to realize, something so good, can only be fake, and I tried... I really tried to fight it back, but it was worth nothing, I fell for him, and today, I told him that I loved him... it was. It was, great.
I felt a great release on my chest and I was finally able to smile. A real smile, I felt happiness in my heart, something I hadnt feel in at least the past 4 years.
It was like what I needed to do, he cried and said he loved me too... and it was over. I had lost the fight I said I would win, Me vs Love. Am I stupid? Did I just sentenced myself to loving another fairytail guy that will turn into a monster after spending so many years with me? I just seem to poison what I touch...

It wasnt always like this... when I was young I was a sweet obedient girl.
Lived with my granma, my aunt, and my parents... Fair enough to say, I wasnt really wanted.
My parents were young and stupid, they ended up making a mistake. Me. Of course, I didn't know this back in the day, so I was a happy child. My grandmother was my angel. She used to take care of me all the time, when my aggresive Mother wasnt around and my father... well, I didnt see him much really. Not because he left us, but because of work... Anyhow, my grandmother was my all and I loved her to death.
Yeah, today when I head back to my past, I seem to be happy for a second. Not a real second, but just a fictional second, like the fictional happiness I held at the moment.
It doesn't matter. I am how I am because of my past. I'll just make sure to leave my story down for the next generations. You aren't crazy alone.