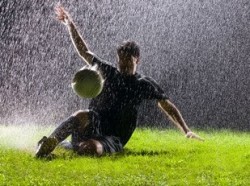 (I may get less polls for this post, but I wanted to post this long time ago, a post on the game which I love the most: FOOTBALL. If you are already here then please read the story and maybe try to poll and comment )

I stepped out of the team bus and entered the Camp Nou. It was our first international friendly game against Football Club Barcelona. Yes, my dream to play against the world’s best was finally over. It was just a few hours to kickoff. My team mates, including me, were awestruck to enter one of the largest stadiums of the world. We knew we would feel a little pressure as we were the away team, very far away from home. We headed towards the changing room.
On our way, we were shown the museum which had numerous trophies from the past – all glittering as if showing their supremacy to us. I turned towards Abhijeet, our goalkeeper with a smile. He smiled back and said ” We will destroy them and show the world we can beat the best.” I nodded and we went ahead.
As we entered our changing room, the lights lit up and we could see our jerseys hanging with our cleats arranged neatly in front of them. One of the organizers came up to me and said, “Sir, you can take your time. We are still 2 hours away from the kickoff.” I asked my team mates to get ready within half an hour because the coach wanted to have a word. I sat down in my place where my jersey and gears were already placed. I closed my eyes and remembered my family, my parents, who thought my dream was impractical yet supported me. I thanked them in my mind. I closed my eyes and took a deep breath. I was going to play the biggest game of my life yet. I equipped myself with my gear, finally kissed the logo of our team and put on the jersey. All of us got ready within 20 minutes. The Coach came in and instructed us with necessary details. We put on our training jackets and went to the field to warm up.
It was already dark and the lights were being turned on. We entered the field and stated with some drills. After almost 10 minutes, I could see Dani Alves coming to the field. Rohan shouted, “Look guys, that’s Alves coming…” I cut him,”Hey, behave like professionals man, we are not fans and if you want you can exchange your jersey with him at the end of the match.” And everyone stared laughing. We were enjoying our time already as we saw the Barca players entering the other side of the pitch. We continued with our warm up for an hour and gathered closer for a final talk.
“This is what we have been waiting for, I am sure they will underestimate us and I am also sure we can beat them. Impossible is nothing, when we have reached here so far we can win this one. Lets play the game of our lives.” I addressed everyone. Everyone was in high spirits and shouted loudly “Aye Aye captain.”
Inside the tunnel, we had lined up with me leading them all. I felt proud and we entered the pitch again with cheers from the huge audience. The atmosphere was electrifying as we shook hands with our opponents. I felt I could stand there looking at Messi for the whole time when I came back to my senses and headed for the team photograph. After all the hard work from the past, we kicked off at Camp Nou between the glittering lights and some world class players and a huge audience – I was living my dream. Barcelona took control of the game immediately AND to our horror they scored in the second minute with none other than Leo Messi. But we couldn’t give up. The game restated and Anwar launched a high lofted ball towards Dhiren, he picked it up at one go and and passed it to Rohan. I made my way forward. Rohan spotted me and chipped the ball over Pique. I had no time to think and tried a volley at Valdes. It stopped and landed at Rohan’s feet, who was now inside the penalty area. Jordi Alba came charging in and Rohan was brought down.
PENALTY! The referee pointed to the spot, the crowd were going wild. I stepped up to take the penalty. I calmly placed the ball on the spot and looked straight at Valdes. when suddenly someone pushed me from back. I shouted in anger, “That’s a red car..d” and alas I heard that same old dialogue “Get up, you will be late for school.” I could see my mom shaking me.
At least I had a wonderful hour of a dream ride I thought to be true. “What happened son? ” asked my mother. “Nothing, that same old story mom.” I replied.