A Brave Step Against Child Marriage 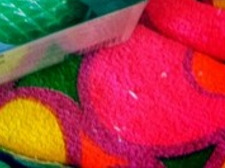 Taken from a website, these lines reflect the sadistic truth of our Indian society, where little girls, even before entering the age of puberty, even before knowing the meaning of 'getting married', even before understanding the piousness of the relationship, the sanctity of being in a wedlock, before understanding that marriage is not all about new attires and jewellery, rather a tough journey towards a new life; are married off. Even when their life before hasn't yet started.

Yet some dare to come out it.
The following is the heart-touching news article posted online:

These statistics might seem shocking to some around the globe. However, in poor rural areas of India, families rely on these unions to provide financial stability. Families use arranged marriage as a means of alleviating having to feed and care for children long-term.

The girls are expected to play the role of obedient wife and daughter-in-law, and in some instances, are beaten into submission by members of their new family, reported Yahoo! Shine.

Just mere days ago, Laxmi Sargara was told that she had to move in with the man she was promised to almost two decades ago by April 24. Girls married off as babies typically live with their parents until they reach puberty and then move out to live with their arranged husbands, reported the Daily Mail.

I was unhappy about the marriage. I told my parents who did not agree with me, then I sought help, Sargara told AFP. Now I am mentally relaxed and my family members are also with me.

With the aid of a social worker in Jodhpur who advocates on behalf of children's rights through the organization Sarathi Trust, they planned an annulment. Rakesh took some convincing but he eventually conceded, according to Yahoo! Shine.

This child bride's bold move to have her marriage annulled could act as encouragement for other women in similar situations.

It is the first example we know of a couple wed in childhood wanting the marriage to be annulled, and we hope that others take inspiration from it, Kriti Bharti, the social worker who orchestrated the annulment, told AFP.

Yahoo! Shine detailed the risks Sargara is taking in getting her marriage annulled. In India, opponents of arranged child marriages can face threats of gang rape, beatings and maiming. In 2009, a 13-year-old refused to wed her arranged husband and was denied food for two weeks, according to an ABC News report.

Child marriage is not only a problem in India, but also in countries around the world. From Sub-Saharan Africa and the Middle East to South Asia and even in some parts of the U.S., underage children are being forced into marriages.

It's been shown that where child marriage is in vogue, six of the eight millennium development goals, you can forget about, Archbishop Desmond Tutu told Reuters, regarding how the growth of India is being slowed by discriminatory practices against women in the country.

I think that India is poised to become a very significant player but, that role would be greatly, greatly enhanced, when women are given their proper place.

The media has shed more light on the suppression of women's rights in India recently.

In December, ABC News' Elizabeth Vargas traveled to the country to uncover what is known as India's deadly secret. Vargas went on shocking information that one million girls are systematically killed every year because of the gender preference for boys, a term coined gendercide. An estimated 40 million girls have gone missing in India, which has a total population of 1.1 billion as of 2010. Approximately 50,000 female fetuses are aborted every month.

Vargas spoke with Ruchira Gupta, a women's rights activist, who said, It's an obliteration of a whole class, race, of human beings. It's half the population of India... We put very little value to girls or to women. So they are always in danger, from birth to death. If they are born, then they might be murdered just because they are girls.

The main reason for the gendercide is money. Families must pay expensive dowries to marry off daughters. When a boy is born, he will bring in the money; when a girl is born she is a steep expenditure. This is the main reason families promote abortion of daughters.

Dowery expenses increase year after year. Once a girl weds, her family is required to pay this fee. If they do not, the girl is often beaten, tortured, even burned to death. And while dowries have been illegal for decades, the law is often ignored."