A century since The Great War. 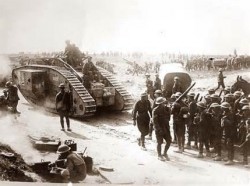 Watching, we hear the mad gusts tugging on the wire.
Like twitching agonies of men among its brambles.
Northward incessantly, the flickering gunnery rumbles,
Far off, like a dull rumour of some other war.
What are we doing here?
Wars have terrible effects on mankind. They essentially destroy the purity of the air that is everywhere our own. Wars not only destroy mankind but also leaves an eternal mark on the generations to come. When we take arms against each other, we always end up killing our own kind and destroying the earth that belongs to none but us. In due course, the lust for war disappears and what remains is destruction and tragedy. No one really gains much from a war-nuclear or not. They’re always a mad race for power , and victory with no real winners. Who wins one war loses the next. War is a terrible thing, but war is not an evil thing. It is the things that make war necessary that are evil. The tyrannies that wars break, the lying formulae that wars overthrow, the hypocrisies that wars strip naked, are evil.
The First World War (1914–18), fought between the Allies, led by France and Britain, and the Central Powers, led by Germany, was the worst humanmade catastrophe of the early twentieth century. As the distinguished Austrian economist, Ludwig von Mises, noted in 1919, ‘not too much economic insight is needed to recognize that a war means . . . destruction of goods and misery’ (von Mises 1983, 153). The ‘Great War’ brought death and destruction to Europe on a scale absent for centuries, though its impact on the rest of the world was relatively muted. Life in the trenches also had many common features. On the front line, the constant threat of death on the battlefield afflicted men of all ranks. The First World War was the first major conflict in which more people died in combat than from disease - a testimony both to its bloody character and to the improved medical support available.
World war one was essentially a pointless war, fought for no reason, costing millions of lives. 21 million people were injured, 16 million dead, including 5 million civilians. That counts up to 10,000 people dying every day. These casualties themselves tall us the nature of the war. And no one dies well in World War 1. Trench warfare, the ugliest, most fatalistic style of war ever created meant charging over a trench wall, essentially committing suicide by machine gun fire, all the while dodging sniper fire, artillery and poisonous gas.Those who survived barbed wire and machine gun bullets went mad or wrote poetry. Their sacrifice achieved nothing, succeeding only in laying down the foundations for another conflict 20 years later. World War 1 has become a byword for how awful, stupid and useless war can be.
At the same time, the Treaty Of Versailles itself later let to another world war. One that would have far greater impacts on the world than this. World War I probably had more far-reaching consequences than any other proceeding war. Politically, it resulted in the downfall of four monarchies--in Russia in 1917, in Austria-Hungary and Germany in 1918, and in Turkey in 1922. It contributed to the Bolshevik rise to power in Russia in 1917 and the triumph of fascism in Italy in 1922. It ignited colonial revolts in the Middle East and in Southeast Asia. Economically, the war severely disrupted the European economies and allowed the United States to become the world's leading creditor and industrial power. The war also brought vast social consequences, including the mass murder of Armenians in Turkey and an influenza epidemic that killed over 25 million people worldwide. In 1918, the Germans fired shells containing both tear gas and lethal chlorine. The tear gas forced the British to remove their gas masks; the chlorine then scarred their faces and killed them. In a single day at the Battle of the Somme in 1916, 100,000 British troops plodded across no man's land into steady machine-gun fire from German trenches a few yards away. Some 60,000 were killed or wounded. At the end of the battle, 419,654 British men were killed, missing, or wounded. Four years of war killed a million troops from the British Empire, 1.5 million troops from the Hapsburg Empire, 1.7 million French troops, 1.7 million Russians, and 2 million German troops. The war left a legacy of bitterness that contributed to World War II twenty-one years later.
The War that took away millions of lives and left billions maimed across the world, had failed to have any positive impact on the world. The War reminds us that war is always a curse on the human race that it is ourselves that we betray and condemn when we fight wars. There’s more to the world war than what we merely read in our history text books.
Today, a century after the Great war, memories of unseen miseries that have been only read from books haunt us. What then would it have been to experience the World War?
“Men marched asleep. Many lost their boots,
But limped on: blood shod. All went lame, all blind;
Drunk with fatigue: deaf even to the hoots
Of gas-shells dropping softly behind.”