A day in the life of a teenager 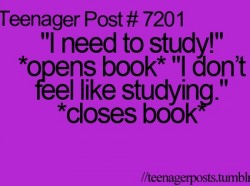 With the tune of ‘wake up wake up’ the alarm clock rings. Groggily Anushree searches for the sound in the darkness of early dawn. She snooze the alarm as usual and lies peacefully on her bed. Oh, only if peace was in her destiny. Two seconds passed and her sleep was yet again disturbed by the shouts of her mother.
“Get up Anu. It’s 5:30 already.”
“Wake up. You haven’t been to college since one week. Enough of your laziness now.” Her mother said firmly, shaking her and pulling off the blanket.
“5 more minutes mom.” Anu rubbed her eyes.
“Wake up till I count 5. Orelse ice cold water on your face. 1, 2, 3...”
“At least my ice bucket challenge would get completed.”
“Huh?” Her socially ignorant Mother pronounced.
“Nothing. I am wide awake.” Anu got up, mentally cursing her college for such a sucking timing. Why do make small kids suffer by making them wake up this early.
Two hours later she was in her college, drowsing on the lullaby of her economics professor who seems to have no full stop at all. She opened her novel ‘The Godfather’ and started reading. Better to read than waste the time listening to this mumble jumble. And her thoughts jumped from who appointed these boring teachers to the interesting character of mafia.
As the bell rang she heaved a sigh of relief. She and her friends began walking towards the railway station, busy in their own conversation.
“Hey Anu, yesterday I downloaded the Bloodline series.”
Viraj walked alongside her.
“The Vampire Acadmey spin off? I want to read it.” Anu drooled.
“Yes, but there won’t be Rose and Dimitri.” Viraj teased her.
“Never mind that. The author writes too good and hence the feels!” The fangirl in her now jumped up.
“True story. You know we should start reading A song of ice and fire series. It’s pretty good, I heard.”
“And Lord of the rings trilogy. And all the books by John Green.”
“Plus, I am having the urge to read Harry Potter once again.”
“God. Me too. Those books never get old.”
“So many books!” Viraj said clearly freaking out.
“I know, right? Life was so much easier when there were only Twilight and Chetan Bhagat!” Anu concluded exasperated.
And they both burst out laughing.
“Now you gave me book sweat!” Anu slapped his hands.
“Book sweat? Whats that?”
“The tension you have when you imagine the list of books still yet to read.” She explained.
“Ah yes. Like Joey’s thanksgiving meat sweat!” Viraj exclaimed.
“I want to watch F.R.I.E.N.D.S all over again!”
“And I have to complete the How I met your mother series.”
“We have to start the Sherlock series too! Oh my god. So much to do!”
“Keep calm sweetie, because vacations are coming.” Viraj said but he pretty much looked shaken himself.
“Guys what are we going to do about gift?” Neelu poked in from behind.
“Its 2 months passed his birthday yet no gift has reached him.” Sayali joined in.
“Oye, that’s for later. The exams dates are out. Yes exams are after two weeks. Drumrolls,” Tejas said as he caught up with them.
“So much to do. So little time.” Anu now clearly depressed.
“Have faith guys. Vacations are coming.” Viraj announced happily as one would say ‘winter is coming’ gloomily in Westeros.
Somehow lost in numerous thoughts Anu reached home. She glanced at the watch. It was 2pm. She decided to sleep a little since she woke up so early today. Immediately after waking up it was decided by her mind to prepare timetable for her exams study. She was determined to get an A this semester. Cursing the Indian Education system she opened her books and read the first line. It was too hard for her to go on. Instead she just decided to read some more novel.
Later at night she opened her book again however alongside lied her mobile of course. And she became engrossed in the eBook of ‘Vampire Academy’ she was reading again.
“Keep aside that mobile or I will throw it away. Whole day you are on that thing. No studies nothing!” Her dad looked at her sternly.
Her mobile was a touchy topic at her home. And she didn’t like anyone throwing accusations at her phone.
“You aren’t at home whole day. So don’t act as if you know everything. I do study. Have I failed in any exams yet?”
“If you haven’t failed you haven’t reached any landmark either. Look at your friends. Everyone doing so much better than you are. Professional exams they have cleared. Learn from them a little. ” Her mother joined in the bashing.
Comparison. Time to get mad and smash stuff. Hulk smash! Or just run away from here to some secluded place.
‘That’s because they are happy in what they are doing. And I have fucking no idea what I am doing.’ She kept that thought to herself.
She just shrugged their words. Ignore. That’s a weapon she has mastered in.
At around 11pm her mother urged her to go to sleep.
“If you don’t attend college together, mark my words I will make you sit and home and do chores. No need of college. You don’t study anyway. Why waste our money!” her mother apparently losing patience.
“I will go. I promise.” Empty threats, she thought busy engrossed in her late night chatting.

Bad Grades?
Bad Grades!
The fault in our marks.

It’s not like my life is any easy. I have to hear these taunts by big people yet they do nothing to help me. Just keep pressurizing me till I whistle out like a pressure cooker.
That day sorted out fight between Viraj and Tejas. Boys! Fight over trivial issues.
And I know myself how much time it took to move over Fred’s death or Dobby’s. Were these people there to help me? No. Just studies.
So much pressure. Teenage life is underrated.
Peer pressure, chores, exams, depression, books, looks, future that’s what goes on in our mind without rest for even a second.
And the one who dares to say teenage life is easy. Bring him to me. I will make a Rick out of that Theon Greyjoy.
Goodnight. Yet another day to deal with tomorrow :(