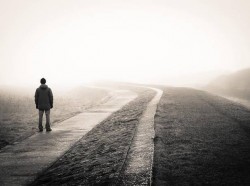 The darkness smothered, yet nowhere for him to go. Loneliness haunted him. He knows the world outside. It is cold, colder than the ice in the deepest winter.The inevitable question 'Why had it come to this?' kept coming back. He wanted to scream 'I don't know!' ,yet he knew the question was inside of him and the action was pointless. Every happiness he ever had, every laugh and every beautiful memories of his past now turned into cold and countless needles poking his heart.
The knife in his hand seemed more friendly than any other being in the universe and more than himself.The bathroom floor was wet and cold. There was nothing but the silence in the house and in his heart. Everything seemed to be waiting for him to do it. He knew it was wrong. Even if he had failed, there were still chances of him finding happiness. But each world seemed powerless against the painful reality. He knew what he had to do. His hands raised the knife to his wrist as if it had a life of its own, all he needs to do now is to Push and Pull. The brain shut his eyes and the prepared itself for the approaching pain. The image of him standing in suits and with a proud smile flashed. The hand moved its position to his fore finger and he pulled. The blood dripped down slowly disappearing from in the water leaving a faint red behind. He knew he could have done it. He was sure of it. But there existed something much more stronger than his desire to run away.
A dream.
The world suddenly changed to its warm gaze. All those incomplete dreams that he had, the life that he spent, all the reason that he worked so hard for and each of his existence.. what has become of it in the very end? A dead man's serenade. They never deserved to be something of such. His eyes opened, looking at the small wound. 'One last time' he whispered to himself.
-Bk