A Movie That Blew My Mind Away 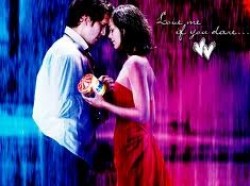 Love me if you dare.
"Jeux d'enfants" (original title)

I was just looking for a girly rom com to watch tonight, when I stumbled upon this movie. Great ratings, and the reviews intrigued me. It was in French, with English subtitles.

This movie made made my heart race, almost stop and all the movements in the middle. Pure brilliance.
A story of love so twisted, so different, that it's almost difficult to believe in.

The story starts with the friendship of a girl and a boy, both young, full of mischief and life. They find a pretty box, which becomes the subject of their childish dare game, and eventually their whole life.

They dare each other to do anything, everything. A for apple is succeeded by B for Boner, Blow job and Badass Bitch. That's Sophie's dare.
Julien pees in the principal's office.
It goes on, for years. Unimaginable things, some funny, some not.

Ofcourse, by the time they're 18, they're in love. But they don't know if it's a game or for real. Sophie dares Julien to hurt her.
They break away.


They meet again after four years. Julien proposes to her. She says yes, just in time for him to make Sophie meet his real fiance.

She breaks his marriage.

Later, he takes her to a place and dares her not to move or remove her blindfold. She stands there, waiting.

She removes the blindfold and steps off the railway track just as the train rushes past.

She curses. Dares him to not see her again for 10 years.

Years pass by. They both get married to different people.

10 years later, Julien receives the box in mail. He goes to her house. It's a trick, the place is trashed and the police arrives. Sophie stands there, in a stunning red dress, watching him run, a smile on both their faces.

He gets away. Has an accident. Sophie rushes to the hospital, to find the man she loved burned, head to toe.

She runs away, her husband by her side.

Meanwhile Julien laughs sitting next to his wife in the hospital. He fooled her. Yet again.
But why does his heart ache?

She realises too, she knows him too well.
She knows the game too well.

They both meet outside the hospital, drenched, their respective partners calling for them to come back.

More emotional upheaval. Flashbacks. Their life. Their game.
But above all, their love.

They walk away, hand in hand. But the game's not over.
Their last dare.
The final dare.

They find themselves a box, a construction site to be cemented.
They satnd inside it as the cement pours all around them.

Holding each other, Sophie says,"We'll never leave each other."

They kiss, as the cement solidifies them beneath the ground forever.
And in that moment, their life freezes. Their game dies, but their love never does.