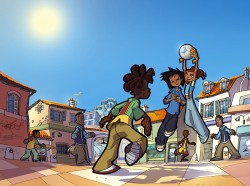 After six hours of waiting, I had still not played any match. I was a substitute for the team White Eagle B, in the rare, sometimes once in a year, Street-foot tournament and one that being held inside the fenced all-around area of the basketball pitch!!! Definitely something not to miss..

I was beginning to get frustrated. My muscles, mainly my calves and my legs started to ache. I was tired of waiting, I wanted to go home. Yet, I knew my teammates relied on me to be there in case of injury. I just couldn't drop out. Things got better when six qualified teams for next round was announced. Both White Eagle A and White Eagle B were in..

The tournament became knockout, meaning both White Eagles had to defeat two of the best teams(both of them were fan favorites)..and to our own surprise, we defeated them indeed. Then three teams were qualified for the semi-final. There was a pool, and it was team White Eagle A that went directly on the finals on standby.

The competition was hot this time. But we managed to knockout team Eclair du Sud and it was to everyone's surprise, that the White Eagles played against each other on the finals. The joy was apparent on every player's face. I was finally, and gladly given the opportunity to play. Team B, that is my team, won the match..

In the end, the nine hours of waiting was fruitful. I earned a big medal..and everyone else was happy.. :)