A tale of Him,Her and I 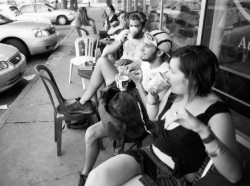 â€œDid you get any work yet? What are you planning to do once you go back to Mumbai?â€ My mom asked me.
Walking through the lanes of my residential colony back home, i knew what to reply but i wasnâ€™t assured of the answer myself. There was this certain cloudiness i saw around my future. Just like the weather that night. Dad seemed least interested, walking nonchalantly along with us. His eyes stuck on the road trying to find any stray dog to feed. It was a daily ritual for my parents. I had gone there for vacations. A few years back walking through the same lane i remembered convincing my parents to go into Film Making. And they let me. I could have said i want to write but that wasnâ€™t a convincing answer. What they wanted was to know where and how that writing would eventually act as my profession.
A fortnight later, i find myself sitting idle at my place yet again. Nothing seems to have changed in past three months. Nothing considerable, though i am little more focused now.

A friend of mine asked me to write her a short story. And so after so many days i finally pushed myself out of my lazy bed, pulled a chair for myself and wrote the following story. It was not hard to write, nor is it a classic work of art. Had it been one great story I would not have to explain my motives writing all these lines. Who reads who does not? Does that matter eventually? Yes, it does. But is it something i can force. No it is not.

So, starting off again after a long time is difficult. Just like forcing a habit of reading or pushing yourself to bed early into the night when sleep would not come to you. So, what do we need?
A story which can be shot in 3 minutes or maybe two minutes, in two rolls of 35mm or may be a few feet more. What do i need to write this story? I need one pair of eyes. Someone who saw what happened that night. So i had this person holding a camera. And i had three characters in between the age group of 22-25. Now to keep the fun of going with it i kept recalling myself, Itâ€™s yet another story.
Hence, begins the story of three friends â€œMeâ€, â€œHimâ€ and â€œHerâ€. â€œMeâ€ was also known as â€œIâ€, â€œHimâ€ as â€œHeâ€ and â€œHerâ€ as â€œSheâ€.
Me, Him and Her, three close friends, Friends; who were born at three different places in far off places somewhere and were reborn that night when they took a solemn pledge. A pledge, we will know about soon.

She was crying, Her boyfriend broke up with her on the very night of convocation party. Although Him and I were there to take Her to ball, yet She missed her boyfriend. She hardly danced any, I kept going in and out of campus to smoke and He was busy drinking. Half way into it, She ran out of the party and they followed her. She kept crying and they would console her and mock her turn by turn. Thatâ€™s how close they were.

Walking through the dizzy sleepy lanes of the city they kept teasing Her and She kept pushing them as they finally reached the corner restaurant. The restaurant was mildly full of people. A few faces sat talking; a waitress stood taking an order at some place.
A perfect set. One, taken from any frame of a typical Film.
They grabbed the tables parked outside on the pavement. One that had been witness to their friendship ever since they met and which shared all their secrets. A waitress walked to their tables, greeted them. He mischievously winked at the waitress, giving a hint to their not so secret, yet quite frequent flings. He asked for an exotic, customised drink, I kept smoking and She took a coffee. The waitress left and the mocking begun again.
By the time there order arrived Her mood had lifted up considerably. Having had enough of the jeering and booing from the two, She finally retaliated with her cunning.
â€œEveryone has a weak point, so stop being such bullies. Look at yourself you drink like a fishâ€, She said as I laughed.
â€œAnd what are you giggling for, You and your cigarettes are the reason for all the global warming and melting glaciers â€œ. This time He laughed.
â€œWhy donâ€™t you guys get over all of it? Actually i think i have a proposal to makeâ€ , She said, doing all the talking by herself.
â€œToday is the last day of our college and our life in this city. Letâ€™s make a pact. We will meet here exactly 3 years from now and by then we will overcome our weaknesses. I pledge to learn to handle my emotions and not fall for any guy. What about you two. Are you in or out? â€œ
â€œCool, I would quit smoking in three years thenâ€ I said.
â€œOkay! I would turn a teetotaler. At least i would try toâ€ He said with a wink and smile.

The cameraman stood there for three years waiting for them to come back. In the beginning time would barely move but then it became a habit to sit there and stare at the restaurant tables and people who came there.

And then finally, 3 years later, they came back. They had not forgotten their favorite. Not a single thing had changed about them. They still looked as if they were in their early twenties. Cameraman stood perplexed watching them noticing no change and just as he was about to give up on the continuity he realized there was something that had changed.
She was smoking, He had tears in his eyes and had ordered a coffee and I had a glass of whiskey in his hand.
The mocking and jeering continued so did the turn by turn consoling.

And that was all. Just like i said â€œIts yet another storyâ€.