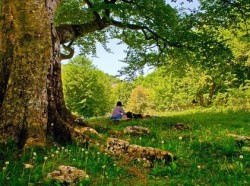 Yash was sitting under the same old banyan tree where one could always find him with a pen and a diary. He sat quietly . The sun was setting down the far west, the sky had turned yellowish. The birds were returning to their nests. In front of him was a large green field. With wild flowers and small plants growing randomly here and there. Some cattle were still busy chewing the soft green grass. Yash saw some small children playing and laughing, enjoying their childhood.
Yash was feeling nostalgic. Tears rolled down his eyes. He leaned on the banyan tree and looked up at the sky.A set of five diaries lay beside him.The diaries which he had been writing since the last five years. He picked up a diary.
He was quiet, he was calm,silently the tears kept rolling down his eyes. He started reading.He kept on turning the pages, his eyes still wet.
He had been there under the same banyan tree days after days, still the place seemed so new to him today. By the time he finished reading all his diaries, the sun had already gone down although there was still light around.
Yash picked up the pen to write his diary entry for the day. He had so much to say.

15th July, 2012
Dear Priya,
I am back to you again. Sitting with you and so close to you.Only you and this old banyan tree knows me so well. Alas I am not such a friendly creature, I could never manage good friends but you two were always there when to listen to all what I had to say. I owe a lot to both of you.
Today I saw some children playing here nearby, I remembered baba. I remembered my childhood,Priya. I and my sister were only five years old when baba used to bring us here. Yes this same place and this banyan was still there, the only difference was that he was a bit younger and this place was a bit more greener. I , Swati and baba used to have the time of our lives. Little did I know the complicacies of life then. And little did I know that baba would leave us so soon.
Priya I have always told you about my day, my present but I never told you my past. Today I want to, Today I will.
When Baba left us I was only eight. I, Swati and ma were left in all poverty. Baba had left behind so many debts. After baba left I was the only male left in the house and I had become mature. I had vowed to myself that one day I would be rich. One day I, ma and Swati would eat three square meals a day. The interest on our debts kept on increasing and gradually I grew up. I worked as a day labor and used to study at night. I never looked back. Whenever at night I saw ma crying to herself, after all her days hard work I couldn't sleep, I wanted to wipe away all those tears. After I passed higher secondary, I started teaching school children. The money which ma had saved all her life went away on getting me into a college.
My hard work had payed off, I got a job. But very soon I knew that my income wouldn't be enough to clear those debts of more than a decade and also getting my sister married. I wanted to earn more money in less time. I wanted to make my hell a heaven.That was when I took the wrong path.
Priya you very well know, what happened after that in all these five years. I had started writing to you on the day my sister got married. You remember right?After getting Swati married, I invested my hard earned money in the stock market.I earned from it and I thought of it as a new way of earning money without working.I was quite satisfied and invested more and more, I kept going deeper and deeper into that endless well.
After Swati's marriage, I had decided that it was time to clear off all the debts bit instead I lost all the money I had earned. When I bought the biggest share of my life the share market crashed I was back to level zero again.You know Ma died last month. All her life she led was in debt. I am still the same Yash that one day visited this same place, this same banyan tree with baba. I remained a failure in life. My debts will forever remain incomplete. I wish Swati lives well, I want to go to ma and baba. I want to sleep peacefully in my mother's lap now.
Till now in my life, The thing I have seen the most is this banyan tree. I want to hug him. He was my best friend ever and you were my only and the most precious lover ever.
With all the LOVE of my life,
Yours forever,
YASH

Yash completed writing when tiny drops of water hit the page of his diary, no it was not his tears. It had started drizzling. He closed the diary and kissed it. He kissed Priya, the girl of her dreams whom he never met.
The following morning Yash was found dead hanging with his best friend - the banyan tree.