A woman trucker..India's most qualified! 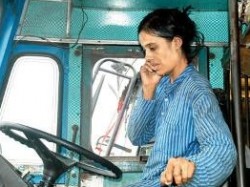 I read about Yogita Raghuvanshi this morning. She created a flutter in the major wholesale market in Mumbai yesterday, when she entered driving a truck laden with vegetables and other stuff. Men stopped doing what they were doing..to gawk at the woman..not in the passenger seat but DRIVING it!

As expected, some good for nothing males standing nearby booed her badly. But she took it coolly and proceeded to deal with those 'bhaiyyas'.

My jaw dropped open, I read further on. She is a Bcom, LLb, actually a north Indian but born in Maharashtra. She was conned into marrying a man thinking he was a lawyer but he turned out to be a trucker. He died suddenly in an accident, her in-laws grabbed his property leaving her to fend for herself and two kids all alone. She knew money would come slowly practicing law. It would take time to establish herself. Desperately, she got behind the truck's wheels and has been there ever since.

She earns good money, but spends weeks away from her kids, driving with her cleaner man in tow, along highways delivering goods. Delivering beer consignments fetches her good returns, as compared to other stuff. Delivering crates of biscuits is dicey, as biscuits tend to get broken en route. She eats at roadside dhabas, bathes near riversides. Sometimes she goes weeks without a proper bath. She loves roads of South India.
'They are better maintained than those of Gujarat and Maharashtra', she says.

I was absolutely amazed by her story.
How does she handle herself so well in this male dominated line of work?
What grit and determination!
What awesome confidence!
I mean it's not a glamorous job like a woman pilot's for example..who gets perks n glory..
but this woman?
her's too is a welcome story!

LE PETIT MOMO
Respect
August 9th, 2013
ASHISH CHAUHAN
Women are no less than anyone else. They are not supposed to be considered. I also read somewhat a similar story of Nusrat Jahan in last month's Entrepreneur issue. In a conservative place like JandK, she has grown her business up to Rs 4 Crs. annually within a decade. A salute to such women who are source of inspiration.
August 10th, 2013
RIYA BAGCHI
:)
August 11th, 2013
ARNICA KALA
inspiring, salute.... go on. women can do anything they want to
August 12th, 2013
Login to comment
2   ·   23 feedback ( rating and remark )
You can also write on WriterBabu. Know More.