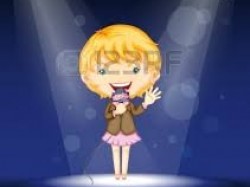 “See she is a slum girl”
Again that word, Shalini was too happy in this moment, her father was crying out of happiness and she was eager to reach him, to show him the trophy, and to hug him.
But in a corner of her mind, one other thought was also there, “Slum girl”
Why is she being seen in such aspect, why is there the term “slum girl”
No one from the audience was there to help her when she was struggling, no one actually even bothered about her, not any one will bother in future about kids like her, then how can they say those terms.
She was in a plight but she did all the effort and came out of it, she never beseeched anyone for help, she was in a slum but had her own life, she was not complaining about it. So why people are now looking at her with a feeling of pity and grant, she doesn’t need anybody’s help, she knows how to fight the difficulties and how to overcome them.
She was then asked to speak something about her journey and about the victory.
Shaini grabbed the microphone, and then the words came out of her mouth as
I am a girl, a normal girl,
A girl with dreams
A girl with normal wishes
Though I reside in slum, dense, impervious to sun’s ray
Though I face plights each night and day
But I never complain, I try hard
I smile with my siblings, play in my yard
I dance to the rhythm of dreams
To let me be free of fetters, to live freely
I am a girl, a normal girl
I don’t want to be known as a slum girl
I don’t want to be seen with pity
I don’t want any sort of grant
I will try and succeed of my own
All you can do is to wish for me
And I will fly high, you all can see
I am in the ocean of plights, like a shining pearl
One day the world will know me as “The wonder girl”

SUNITA UPD
Congrats! well written..what is slum???? who made them??? Anyway I see differences in background as purely situational and geographical...those who think it as human inferiority are just sick and need help. If we all tell them so loud and clear it will make the big difference. But one needs gut to tell this.Human beings are all just human beings! No debate upon this!
May 8th, 2014
Author
Thanks ma'am....and yes it is true that all humans are same, but circumstances do play vital role in growth, kids of fortunate section of society generally don't face so many plights, and of course it is our duty to accept the less fortunate section as a part of our society and to help them in all possible ways.
May 8th, 2014
SUNITA UPD
I'm impressed with your reasoning. I don't know your age anyway... if everyone thinks like you we will get back our world as designed to live by God! I agree it's been made into rotting hell! But, the young generation has the the power to change JUST everything unless they are weaklings...Sorry, I believe in setting new trends and NOT blindly following the old useless ones. Good luck for your endeavour.
May 8th, 2014
Author
I agree with u, and there r ways by which initiatives can be taken ..thanks ma'am
May 8th, 2014
SUNITA UPD
Ya i understand that... by staying unclean we cannot preach others to get clean. we have to become the dynamic and create that to bring change...so many people just plant some bright roses in the dumping ground and say 'No there no dirt here! not at all!' Its denial - an escape. So, Its a new mindset that should be cultivated, not away but here itself! Anyways...
May 10th, 2014
Author
:)
May 10th, 2014
Login to comment
2   ·   3 feedback ( rating and remark )
You can also write on WriterBabu. Know More.