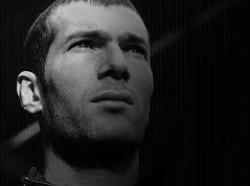 Amidst all the glitter of FIFA 2014 and the loud cheering for the likes of Messi, Ronaldo and Neymar , a legend was quietly celebrating his 42nd birthday on 23rd June. Did I call him a legend? Pardon me, for many of his own teammates, both from the clubs and national team consider him to be God, even if his affection for red cards prove otherwise.

Am I talking about Pele? No. Pele has more to thank to his teammates for his glory. Is it Maradona? Close enough, yet no. Maradona was more of an individualist . The person I am talking about was a magician with the ball. He was the ultimate game-maker. He doesn't have many goals to his name yet all his teams' goals could be attributed to him. He scored at will and he scored when it mattered the most. He scored in the semi-finals and finals against the best. I have never seen Dhyanchand play hockey, but when I see this man playing football, I can assume how those who watched the great Major, must have felt. He was neither a talented eye-candy like Lionel Messi, nor a showman like Cristiano Ronaldo. He was not as fast as Robben nor he could bent it like Beckham. His accuracy in passing has also been surpassed by Xavi; yet he stands above them all. His greatest asset was his total control. He could change the direction of the ball as smoothly as a kite does with the breeze. When he passed the ball, it was like someone passing an art of great value. He is the only player that I have seen, who could make an accurate pass without even touching the ball. He has made defenders pray and mid-fielders cry throughout his career. He was a pleasure to watch. He was calm like still water at one second and the very next second you could see the ripples of sheer brilliance, a wavy pass and then the calmness again.

Those who know football must have guessed by now, that I am talking about "ZIZOU", officially known as Zinedine Zidane. An Algerian who represented France in the World Cups and Real Madrid in the leagues. He was responsible for France's first ever World Cup win in 1998, when he scored twice in the finals against Brazil. Two years later France became the Euro Champions with Zidane scoring only twice but against Spain (quarter-finals) and Portugal (semi-finals). In World Cup 2002, his absence from the first two group matches saw his team out of the competition in the group stages. He was compelled to come back after retirement as France was struggling to qualify for World Cup 2006. In 2006, he was awarded the Golden Ball as the best player of the tournament well before the final match against Italy. He has been awarded FIFA player of the year thrice, a feat matched only by Ronaldo (Brazil) and Messi (Argentina).

Sadly, amongst youngsters he is still remembered as the 'guy who headbutted Materaazi'. Yes, he was wrong to do that and was justly given the red card. As one of the admirers of his talent, I was hurt and do not mean to justify his action, whatever be the reason. I wish he could control his emotions like he controlled the ball. But let us put all that behind. My only wish is that a talent like his should not be remembered for the wrong reasons. Let the generations to come understand that there was a man who could paint with his passes, who could create soft music with his legs and who could make football turn into a running poetry. The man who was the Achilles of football: talented beyond measure, filled with ambition and finally destroyed by his own anger- Merci Zizou!

If you think I am the only one who hails Zidane as the greatest, please read the following:

"Give me 10 wooden blocks and Zidane and I'll win the Champions League" - Sir Alex Fergusson.

"Zidane was from another planet. When he stepped onto the pitch, the other 10 guys just got suddenly better. It is that simple" - Zlatan Ibrahimovic

"In France, everybody realized that God exists and that he is back in the French International team."
- Thierry Henry

"He dominates the ball, he is a walking spectacle and he plays as if he had silk gloves on each foot."
- Alfredo di Stefano

"What he could do with the football is a dream for all of us." - Xabi Alonso

"Zidane is as magical as me and Michael Jordan put together." - Magic Johnson.

KAUSTUBH RAMTEKKAR
Thanks for the extraordinary and interesting information :D
I might go and watch his gameplay on Youtube
July 12th, 2014
Author
Do watch. This guy is a pleasure to watch. :)
July 12th, 2014
Login to comment
2   ·   8 feedback ( rating and remark )
You can also write on WriterBabu. Know More.