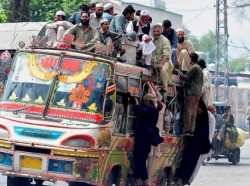 “Baji ajao jaga bht kahli hai” the conductor shouted out loud even when the bus is full till the door and there is no place to stand in the bus.
Public buses nowadays are the rising issue of Pakistan which needs attention and need to be target.
The driver is just concern to drive & the conductor is just concern to money no matter how loaded the bus is, he still has the space where he can adjust the passengers. We all somehow has gone through this experience, here is my experience which I would like to share with all of you.

- I have to win: The bus driver when seated on his seat he aims that today he has to win & left behind all the buses & if anyone tries to beat him in race, he would surely go faster being conscious of the fact that the passengers are travelling in the same bus which includes women, children and aged people.

- Anti’s Fight: The anti’s in the bus travels like bus is a home to them, always fighting to grab the seat, they push each other and if you say anything they will shout like you have done a crime and will do anything to prove herself right.

- I own the road: The driver owns the bus and he is free to stop anywhere on the road because no one can claim him. The passengers wait inside a congested, foul-smelling bus, the driver can usually be found roaming outside, smoking or chatting with his conductor buddy until many passengers lose their tempers.

- Men in ladies Compartment: There are no rules and regulations to travel in a public bus so where ever the conductor wants he can seats the passengers either its men in ladies compartment or ladies in men’s compartment. What matters to him is that he can seat maximum passengers in a minimum place.

- A break and we all fall down: Usually in buses the driver is hurried to reach the stop and in that hurriedness when he see a hurdle he press the brakes which makes the whole bus fall on earth :P but still “driver ki koi galti nahi” (he will never admit his mistake)

- Bus fare keeps on changing: Bus fare will never be the same every time, sometimes the conductor will ask you to give 5 rupees more or sometimes 10 rupees and by mistake if you point out that thing he just have one thing to say “Paisay do warna agay utar jana”. If the passenger did not give 2 rupees it’s a big issue but if the conductor don’t return the money its not a big problem.

There would be many issues you would have suffered while travelling in a public bus. The need to write this blog is to draw your attention to this issue because we all somehow had been affected by this problem. To me every drop must be rectified of our country so we should bring a positive change in our country.