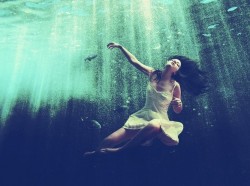 Her familiar landscape was replaced with something completely new, unknown, an air of melancholy surrounded Akasa as she stood on a narrow small bridge above the impenetrable blue sea. Rain poured down in torrents and it seemed as the level of water in the ocean was increasing every moment and was getting closer to the girl. Even some tiny meter away or less and the water got to Chris who was trying not to lose balance, reeling like branches in the wind. Rain became stronger with each passing second and Akasa's fear increased with every wave. The only thought that captured her mind was "Lord..help me" but the prayer wasn't heard. The water finally reached the bare feet of Akasa. She gasped for the last time and the realised she can no more stand or lean. The bridge disappeared, it was broken by the strong winds or maybe laid in the arms of the great sea. At this moment, Chris was in the water, he was unable to see the bottom. She opens her eyes and sees nothing but his hands trying to gasp their immensity. They were underwater, attempting to float upward but she kept floating down. There was almost no air and the brain needed another dosage of oxygen, disorientation had caused them panic. Legs..still didn't reach the bottom but for Chris it would be no better. She tried to inhale..and panic covered him from head to toe. She tried to scream but only saw bubbles coming out of her mouth, she didn't know what to do, out of desperation she waved her legs and arms but in vain.

It was too late for a miracle to happen. Her energy was gradually draining in the depths of water..she realised that the only thing she can do is surrender. She was devoted to the force of gravity, she sank into the bottom. Her eyes looked up to watch the Sun slowly fade. Her hands were catching the bubbles, she fell into an undiscovered abyss. Chris could no longer see Akasa's beautiful eyes. His arms and legs were numb from the coldness, it seemed like an eternity has passed and..

When she really couldn't feel her legs and could not understand anything, she felt something hard touch her feet, the next second it was gone and there were familiar outlines of her native room.

Akasa realised that it was just a dream. She took a long breath but her limbs still trembled. The fear remained within her, its not the first nightmare she saw this week. She tried to get up, numb, as if her legs would not obey, its only a dream but her taste of tarted despair still remained on her lips.