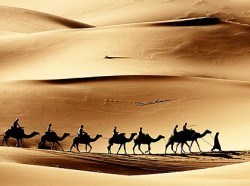 The Alchemist, the one who can turn lead into gold, knows the language of world and can penetrate in to the Soul of the World!

"When you really want something, the whole universe conspires to give it to you." The whole story makes us believe in this very thing through the story of a shepherd who became rich by remain sticking to his trail leading towards his dream!

Though I was reading the book second time, yet it was like as if it was my first time. I found myself completely immersed in the story, less impatient to count the pages left to the end and perceiving better than before!

Sitting at one place in my room I had been in the streets of Andalusia with the flock of sheep, in Tariffa_ feeling the levanter on my face and my lips dried, in the market of Tangier (in Africa) _later on the hill selling the notion of savoring the taste of tea in crystal cups, deep lost somewhere in Sahara experiencing the nature of sand in days and nights, in midst of palm trees on the oasis Al-Fayoum looking in to the girl's eyes making me fall in love with her! It was the moment too when I came out of the role of Santiago for some time and personified myself as Fatima.

Can men be that weak sometimes that they need to be encouraged by women? Can women be that strong to let the love go away? Can love weaken people? Or it is the only thing it does? Or I am thinking wrong? Those questions were running among my parallel thoughts. I preferred to continue with the story.

In those two hours, with no-one to interrupt me, I also had the scaring sight of the alchemist. I felt the feeling of being in between the devil and deep sea when I had to take my own decision! Decision taking has always been a problem with me, but as Santiago I had to finalize it in one night whether to go after the uncertain dream or to consider the girl and the gold as all his riches and destiny.

I decided to go on. First because the girl could understand the quest of dreams. Second because the alchemist had made me realize that I could come back to my routine whenever I wanted but the decision of giving up at that very point where I had been so near to my destiny will burn me from inside in the coming time and will make dead while breathing! So, better to give a try rather than to remorse later. For some people never succeeded because they never tried to fail!

I had the nights with the alchemist when I listened to my heart the most. Yes, the fears hurt us the most! I had been the wind, the sun and the desert! All is one! Because all is made by one same hand and will be returned to that same one and only hand!

If he had not strive for his want, he would have failed to fulfill two of his dreams at once_ one of traveling much more than any other shepherd, and second that of finding the treasure!

I smiled when he smiled while digging that place beneath the sycamore ... complaining about being mocked at by the monk (who had that gold plate for the boy left by the alchemist as he knew the course of boy's destiny) when he returned to him from the Pyramids in tatters after realizing where the treasure was... yet perceiving the meanings of that long course!!!

I came out of that story after reading the last word, after-all I cannot spend my whole life in imagination, no matter how convincing it may be!

I loved reading it! I loved living one more life! I loved living the life of the courageous and the winner! No doubt, the status attracts me but it does not make me blind :)

Yes, we make our destiny! And yes it will surely be by following our desires! But it is the course that matters the most! If the course we followed brought us to the destiny parallel to the one we desired, then believe _it never had been your destiny but the REASON of TO BE YOU!!!

What are prayers for then? the efforts?

Because it is written too for what you have to pray hard and when! Everything that may not seem to have any positive impact in your life, even a small prayer, means something_ to teach you. It is not necessarily the big lessons always! It can be so simple a feeling of relief you feel after prayer because you believe! I can be the charm of smiling! It can be the satisfaction you get after feeding an orphan! It can be anything!

Though I believed every word of the book, yet I deny the writer at one point when he writes,"it is not what enters men's mouths that is evil. It's what that comes out of their mouth that is."

Yes he is right, but that certainly does not mean that Muslims should start taking in that wine which is abandoned in their religion!

I am not biased or against any particular religion, I just want to say, question yourself before becoming a bigot! I will again say, not every dream points towards your destiny! Hear the voice of your own heart! It will never misguide you!

PS: Love is a weakness that strengthens the two! It is not the weakness of men that make them confide in women, but Love! Weakness is what can harm you if shown. But, Love never harms! For it is the reason of this universe! Reason of You!