Bharatnatyam – A concord with the divine 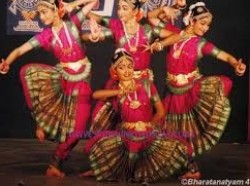 "Dance is your pulse, your heartbeat, your breath. It’s the rhythm of your life. It’s the expression in time and movement, in happiness, joy, sadness and envy."
Bharatnatyam- Bha for bhava, Ra for raag, Ta for taal and Natyam for abhinay. One of the most ancient dance forms of India, it is a reconstruction of the dance form Sadir and originated in the state of Tamil Nadu. It was performed in the temples in the honour of Gods by the temple dancers called Devdasis. One would observe the sculptures in Hindu temples resemble the dance postures of Bharatanatyam. In a Hindu temple, the deity, who is the chief guest has to be offered services named Shodasha Upachara "sixteen hospitalities” that please Him. Music & Dance are among the sixteen hospitalities. Bharatanatyam is a solo dance, with two aspects, lasya, the graceful feminine lines & movements, and tandava, masculine aspect. Bharat Muni’s Natyashastra is one of the major texts of Bharatnatyam and it is also said that the name of the dance originates from the author’s name.
Dance is a form of expression of one’s inner self and being. When you live something in all its states and forms, it does not remain a mere form of talent or art; it becomes a way of life; that is what Dancing in general and Bharatnatyam in specific has been for me all these years. I was ten years of age when I first got acquainted to the mesmerizing world of Bharatnatyam. It has been a journey of self exploration and the pursuit of the divine since then.
With all the specialties of Bharatnatyam right from the bright coloured brilliantly made silk dress, the most exquisite jewellery with significance in every piece of it, to the melodious sound of the Ghungroos it feels God’s very own. One of the most difficult dance forms Bharatnatyam is way different from a lot of dancing styles in many different aspects. Since its inception from the temples of South India, it has been a way to communicate, praise and worship the divine; which remains till this day. All the themes and pieces of the performances are tales and appraisals of the Gods. Every mudra, eye movement, stance, expression and their different combinations are clear depictions of God or the masterpiece crafted by Him-nature and the minute details of the mundane human life and expressions. The movements of a Bharatanatyam dancer resemble the movements of a dancing flame. So, Bharatanatyam is considered to be a fire-dance — the mystic manifestation of fire element in the human body
It is not only the technicalities of the dance form that distinguish it from all other forms but also the culture that it imparts and carries within. Originally being taught at Gurukuls, it has travelled all round the world to various cities, states and nations. But one thing that has not changed and will remain the same forever is the value system. The Gurus who are the masters of the dance form impart a tradition of mutual respect, sensitivity, respect for all the beings-living or non-living on this earth, and a sense of belonging to the divine to the disciples. The Bhoomi Pranam done before the onset of the performance exemplifies this, wherein one is supposed to bow in front of the Gods, Mother Earth and the Guru and seek permission and ask for forgiveness from Mother Earth for inflicting pain upon Her by dancing on Her. Discipline and sincerity being of utmost importance for anybody who wants to learn Bharatnatyam.
Practicing and performing Bharatnatyam is a lifetime experience. There’s nothing that this form can’t depict. The tales of the Gods are narrated with complete stature and perfection. The act of performing it connects you to the supreme power in a way that you feel His presence. A new person is born within and the soul meets its master. It inculcates a whole new energy and you feel His power completely. If spirituality has anything to do with worship, it’s the first thing that binds the human mind, heart and soul to the Omnipresent through Bharatnatyam. It sends a wave of happiness through me every time I perform; a feeling of satisfaction overwhelms me as I proceed with it. There’s a purpose everyone is born for. It seems the purpose of my birth is to explore and live through Bharatnatyam; all those emotions which an ordinary human being would never be able to experience.
In present day India, it may seem to be dying out; for the lure and glitter of the western forms is too bright to be missed. But whenever we talk about the rich culture and heritage of India, Bharatnatyam stands out against all the odds and showcases the glory India has held for centuries and the glory it’ll hold for centuries to come.

SRIJAN SRIVASTAVA
delighted to read about dance from someone who truly know the meaning of dance ...

It had been a regret that I was never able to learn a indian classic form of dance ... we just did contemporary and hip-hop at IIT ...
April 16th, 2013
Author
Thank you for your appreciation :) Classical dance is a whole new world in itself
April 16th, 2013
PRATEEK PAPRIWAL
article has been nicely framed ... keep it up !!!
April 22nd, 2013
DAVID ERICKSON
I don't understand much about dance but my daughters teaches it. Keep writing and educate us who don't know too much. thanks
November 3rd, 2013
Login to comment
2   ·   14 feedback ( rating and remark )
Copied / Reshared
You can also write on WriterBabu. Know More.