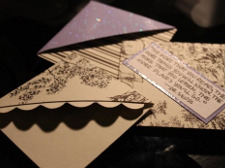 It is always said, love is not done, it happens...true. But it is also true that when a relationship breaks, it too happens and its not intentionally done.

People do fall in love, that too in a wide variety of age groups. Its just a mere flow of hormones, that stimulates your falling in love. I am not saying that people are doing wrong when getting into love, but I am trying to say that when true lovers break, even they are not doing wrong. Whenever people hear of a breakup, they just try getting into a conclusion where either of the two is responsible for breakup. I remember a line from a movie, 'Little Manhattan', where father explains his son what went wrong in his relation with his mother, it comes around after 1 hour 15 mins of the movie. The father says that things remained un-said and it got piled up which created distance.

But the things that were to be said, the time for that has gone. Sorry to say, but it wont bring back the relation back on track. Sure, it would make both the people feel better for themselves, it would make them stronger than before as person but won't help the relationship.

I am just trying to bring out the breakup scenarios, which are not often talked about. If any of your friends who has broken up and if he or she was in a deep relationship, won't give a definite reason for getting off the relationship. I am not saying that this is what always happens, but most of the time, it does.

So the overall crux of this whole 'breakup' topic that I want to convey is that people call their relationship off for a reason, which they themselves don't know. But they atleast know this much that they will be better off with themselves after giving up the relationship. And the people around shouldn't condemn their decision, as they don't have any idea what the two people have gone through.

Just once in a while, knock the doors of your LIFE, coming out from the house of LOVE LIFE...'cause I heard it somewhere and very true to the words...'love is just a part of life, not heart of life.'

* and by love i mean couple love, not any other 'kinds' of love.

"Love stories are not NECESSARILY happy, their MAYBE happier things around..."

P.S. - Said the above things with loads of experiences faced by myself and many others whom I have come across.