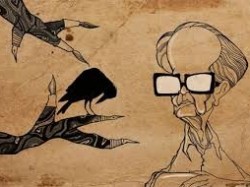 I remember looking into my watch around noon in a busy bus station 4 years back. The time is nearing 10:45. Arms draped across rusty painted metal. Black lines swirling and cascading across the leather of aged wood.

I remember the sun starting to smile at me. At first gently. Then slowly severely.

But I liked it.

The heat descends on my skin like a cloud of venom slowly billowing into the bloodstream. Swimming I remain suspended in that the cocoon of warmth.

It was a contrast.

A lazy stupor of the body with the gentle waves of my mind.

My friends are yet to come. We are 20 minutes away from reaching the project center and it starts at 11 am. I started cursing my friends. Late as usual. Waves of curses gently crashing across a shore of warmth.

And then this crow alighted next to me.

Usually, I would have looked elsewhere. But this one was close, and boredom drove my eyes to it. And slowly it flapped it's wings across the winds of my mind.

Some old newspaper passage drifted in from ages ago.

About the cartoonist R.K.Laxman. It was not just his ascerbic wit that was the hallmark of his personality.

Along with his cruel ink.

Puncturing the poor ego of politicians. Trembling and caught in the cold cage of his cartoons.

He had done a lot of paintings too.

And there was a connection between both. The hero of his cartoons was always the common man. The standard staple of a political diet.

The hallowed of his paintings were the crows.

Many have immortalized eagles, hawks and peacocks on canvases. Even doves were caught in a lot of them.

In R.K.Laxman's world, it was always crows.

In their many designs and and poses, they found a temple in R.K.Laxman's ink.

This smoke of old articles slowly woke my curiosity. Lazily I watched them.

Their neck had a shimmering iridescent shade.

Reminds one of pregnant dark clouds.

Or like some sort of hellish steel. Pounded into a black shade in the smithies of hell. Imagine this blade being prepared. Coated lovingly in grease before being sheathed in some fell garb.

Preparing them ultimately for the warmth sheath of flesh.

Imagine the dull shine with which such a blade smiles.

And you get the color of the crows neck.

I noticed their eyes. Liquid black.

That would be it.

Like the bellow of a pool in the bowels of the night.

It was a delight watching them.

And my fascination grew, like the fondness of the cartoonist for them.

Slipping I fall, into a dark whirlpool of clever black eyes.

I think I understood it at last.

Sign In to know Author - MARTYAN
Spread the word ...