Darkness in the Light of Its Mysterious Aura 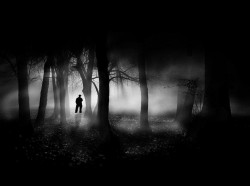 Darkness is an evil that wants to capture things that it is envious of. Envy that keeps growing whenever it is replaced each day with light. Light that brings hope, faith, joy, smiles and other such emotions to people. Emotions too positive to be tolerated by someone who hasn’t ever got a chance to feel them. Darkness awaits the moment when it replaces light, by capturing it and keeping it away from humans for 12 long hours. The moment when it surrounds the entire atmosphere, not allowing the thinnest ray of light to enter its world and imputing hopelessness wherever light once instilled hope.
Darkness, Why is it so dark? Why does it have to be so evil and always show its darkest side? Is it so evil or is its villainous side just a disguise to hide the light that had once empowered its soul with hopes? Hopes that were shattered unheard. Hopes that were so false to have turned a pure, innocent heart into a one so treacherous whose side it would once fear.
Darkness is that innocent child who would play and sing along with the winds. Whose sweet chuckle would be enough to put the tired souls to rest. But as day would replace it, people would thank god for the beautiful day and not for the peaceful night without which the day couldn’t have been beautiful. People favoured day more as in its light they would see the beauty of things that darkness could not have shown. Light attracted everyone with its brightness and darkness lost those whom he thought were his friends. It lost everything that it thought was its. The light of things beautified them to such an extent that there was no place for darkness. Darkness had also hoped for the best of things, but its hopes were trampled and crushed because people cling on to those that have more to give. This trampled hope brought darkness closer to reality. It unveiled the bitter truths that light had kept us away from. Darkness is nothing but the medium through which we learn about the harshness of reality.
Darkness is not our enemy but our best mate. It is still our friend though its friendliness is in disguise. Its light hides itself in the cocoon that trampled hopes have forced it to build around it. We still can't visibly see how selfless it is. It mourns along with us when we face the worst phases of life. The time when we fear being visible in light. It pacifies us and lulls us to sleep, whispering its favorite lullaby. It makes us see the sweetest of dreams. It is happy being made a sideline when we praise the beauty of the stars, forgetting that it would not have been possible without its presence. It is darkness that gives us the time to spend with ourselves, making us feel the serenity of the evenings by engulfing all the day’s tiredness and extracting it from our wearied bodies. It is darkness that brings us closer to reality by showing its darkest side, making us feel trapped, suffocated so that we face our fears and come out of the illusion which the light of hope creates.

So do you want to face reality in the blindness of the dark or become blind in the brightness of light?