Ebola – A Synonym of Fear 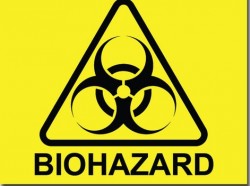 In a recent turn of extremely fearful events, the world has been gripped by a new terror, in the form of a VIRUS. An epidemic that threatens to wipe out chunks of human population.

Formerly known as Ebola haemorrhagic fever, Ebola virus disease (EVD), is a severe and often fatal illness in humans. The initial transmission of the virus takes place from wild animals to people, and the subsequent spread is through human-to-human transmission.

This deadly virus first made an appearance in 1976 in two back to back outbreaks, in Nzara, Sudan, and in Yambuku, Democratic Republic of Congo. The disease takes its name from the Ebola river, near which the latter village was situated. Remote villages in central and west Africa , situated near tropical rainforests are the primarily affected EVD outbreak areas.

Burial ceremonies in which mourners have direct contact with the body of the deceased person can also play a role in the transmission of Ebola.

Men who have already recovered from the illness can continue to transmit the virus through semen for up to 7 weeks after recovery.

Also, among workers in close contact with patients with suspected or confirmed EVD, have reported cases of the transmitted virus, due to recklessly practised infection control precautions.

The initial signs that might help you recognize this fatal illness are abrupt onset of fever , severe weakness, muscle pain and fatigue and traces of sore throat.

These subtle symptoms are followed by vomiting, diarrhoea, rashes, impaired kidney and liver function and in some cases internal and external bleeding.

Samples from patients are an extreme bio-hazard risk thus the testing should be conducted under maximum biological containment conditions.

Unfortunately, no licensed vaccine for EVD is available. Several vaccines are being tested, but none are available for clinical use.

As the saying always goes, prevention is better than cure, especially for an illness that does not have any verified cure as of yet. Here are some tips and tricks (though I highly doubt that EVD can be tricked any how) to deal with Ebola prevention.

-Animals should be handled with gloves and other appropriate protective clothing. Animal products (blood and meat) should be thoroughly cooked before consumption.

-Communities affected by Ebola should inform the population about the nature of the disease and about outbreak containment measures, including burial of the dead. People who have died from Ebola should be promptly and safely buried.