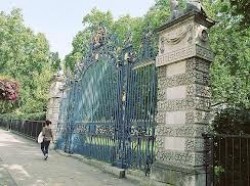 Two men were sitting there on a bench near the north gate of the park which generally opens either on big occasions or when any politician comes. (As though entering through separate and huge gate which is not for general public is respectable and will create an image of powerful leader.) The men were indulged in talks. One of them was smoking and coaxing the other one to have a puff. By just looking at them, It was quite difficult to say anything about anyone’s identity.

But anyone could guess after reckoning the laziness in their body, bulged tummy and listening to the subtle talks that they were government servant. This possibility did seem nearest to the reality because the park was situated before the secretariat. It was not lunch time, however, it need not be wondered seeing them in a park. But yes, Instead of it, we can be astonished finding a government servant working seriously provided that deadline of given work has not been passed.

At the same time, a middle aged lady wearing grubby and shabby clothes entered the park through the revolving door near the giant gate. Her face, with chapped lips, was pallid and wrinkled. Her eyes were tired, and hair, with a braid, was confused. The way Saari was worn was not looking appropriate. Her shoulders were bowed down because of couple of carryalls hanging on them. She was a mendicant. Anyone can tell that whatever she received by visiting door to door was filled in two holdalls. Perhaps she has got sufficient for today so as to satiate her appetite hence she found this park quite suitable to sit and have food with tranquility. As she waddled and reached before the chair, in which the men were sitting, the flow of their so called secret talks broke and gestures changed completely. Initially given vacuous expressions converted into vicious look very soon as if a prisoner from hell has trespassed boundary of heaven and was challenging them to stop her.

She sat on the grass beside the third chair from the gate and started searching something in the bags. In a few seconds, appearance of less number of wrinkles than that of few moments back on her brow conveyed a message that she has got what she wanted to find. She brought a newspaper out of the bag on the right shoulder and laid it on the ground. She took collected things out of the bags one by one and placed them on the newspaper. They did not like this and one of them looked around to call the guard but could not find him. He troubled himself to stand up and reached before the woman who was busy in fossicking through both bags. He said with asperity, “What are you doing this? Do not litter here.”

The lady looked up with uncanny countenance. She looked all around as she was not sure the person standing there was talking to her. Rarely did someone try to talk to her. She got either responded or alienated so far in her life. She stammered and mumbled under her breath,’’ wha…what sahab???”

The man standing there got bothered a little to repeat but he did repeat. “What are you doing this? Be refrained from littering”, said government Babu in rough voice.
The lady looked at the victuals that were laid arbitrarily on a paper on the grass. She knew that this couldnot be food for classes other than poor, and it was also true that, had these collected things been understood worth eating, it could not have been with her. She thought that perhaps, sahab misconstrued the situation. She, trying to put fake smile and sympathy-requesting expressions on the face, replied,’’ litter… no sir!! I have just sat to have food. I kept begging from early morning and could not collect something satisfactory until now.”

The man, being suggestive, told further,” why do you beg for food? Why don’t you work anywhere and earn money to fulfil your needs?”

Generally beggars don’t have answer to this question but she has. She said, “Spiraling prices of staples like daal and vegetables left us unable to purchase them. We can only beg for them. Some government's policies intended to reduce the gap between the haves and have-nots deviated almost 180 degree from what was expected on their consequence part. Despite of it, if we beg from government, we get inhumane and violent response such as lathis or tear gas. Generosity and gentleness of a few gave…..!!"

Sarkari babu interrupted the tatterdemalion as if it was his duty to stop a lady exposing government and its policy failures in very simple words and said with a frown," do not divert the matter. Everyone wants to blame government."
"I just want you to go from here. Otherwise, you will definitely litter here."
“My son, I will be extra careful about not dropping even a single piece of Roti. If it drops, then I will clean it. And… And…”, Said lady as if this time she was begging for a corner.

Meanwhile, the other person, half-bald, having mustache and bilious by nature, finished last piece of chips and stood up leaving plastic (polythene) pack of chips on the bench and throwing the cigarette butt in the dense thicket intended to join the argument going on between his colleague and the lady.
” …And I do not have any plastic bag with me too, hence I am with nothing to drop here,” Continued lady quickly as if she has got an apt reason as a shield against the sword of arguments.

Last few words of her reached to the eardrums of second man as he just reached there. Instantaneously after coming, he, looking miffed, spoke in a fit of pique,” why are you escalating the matter? Do not be so adamant. If it is prohibited here, then it is. No exception. And cannot you see the board behind you near the Asoka tree. Isn't it clearly showing “do not litter”.”

The lady was stunned due to double standards those men were adopting. Tired, hungry lady lost her humbleness and said with sarcasm,” yes, I can.” This time her sentence was lacking words like son, dear and sir.

She continued, “But I can also see the board which is showing “playing cricket is not allowed" working as stumps for group of children. I can also see the board which shows "do not spit" being used as hottest corner for gobbing. Even word ‘spit’ cannot be read effortlessly because of stain of gutkha on it. Moreover, the board showing “do not litter” the example of which you are citing itself would have been under the heap of litter if you would come even a day later." She took a long breath as if she invaded a well-fortified bastion.

The man replied quickly in a burst of spleen,” do not try to teach us. We do not know who spat or threw litter here? But we caught you red-handed."

She looked up in astonishment and whispered,” caught..? Red-handed..?? Am I criminal?" She got a bit down in the dumps.

He did not stop and kept speaking,’’ public places are not your property. You do not have right to have food here." He turned and faced the other man and, taunted," do not get bogged down with a beggar," stressing word "beggar", and continued," And let's end the matter here."

Finally she succumbed. She began to put randomly placed things back to the bags but she could not stop herself saying something, which made them extremely angry.

They hit the ceiling and screamed,” just shut your mouth and get out. We….Their voice got interrupted abruptly by a harsh sound of siren. They looked back and found the car of chief minister, escorted by several other cars, had come to the gate of secretariat. The second man told to first one,” we should not be out of the seat at this time. Come, let’s move from here" and they slung their hook.

The lady had placed all things back to the carryalls. She was going out of the park, shuffling through the soft grass and fallen leaves, by revolving door on the left side of the giant gate. At the same time, a dog was entering the park from revolving door on the right having a piece of flesh in mouth.