I own an Ecosystem! Do you? 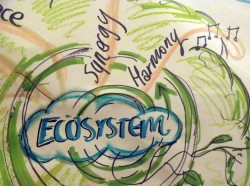 Wherever I go I would own one. A garden at my backyard - Is an ecosystem I own at present. A garden that stands as an oasis amidst the deserted city with gigantic apartments and commercial buildings, as these poor humans would pass by carelessly being lost in their own busy schedule.
The garden as it sprouted with couple of the flowering plants I planted, by now it’s a green pasture as an oasis with well grown trees in a span of half a dozen years. The garden, on its initial days as I had a close eye, watching it and gardening it, to my surprise I knew the garden has become a home for a chameleon – the first gentleman to be present at the garden as he was pretty comfortable watching me watering plants with his head tilted. I was pretty confident that he knew I had helped him built his home, the one he had be longing for a long long time and finally we both where comfortable at each other’s presence. It’s satisfying for me helping him with a new leash of life!
One fine day, as a miracle the garden has invited its native dwellers - ants in variety, frogs, garden lizards, spiders, butterflies, bees, and may more insects for which I am yet to find their botanical names. The trees in the garden have extended their warm invitation to squirrels, cats, and birds like crows and cuckoos, adding to the ever growing list of dwellers. For every coffee sip I have every morning, I would find couple of pigeons wandering in the garden with their unique cooing voice and some pigeons having their cautious repeated flights searching and picking the withered stalks to build their nests. The other frequent guests’ include parrots, common myna, woodpeckers and may more tiny birds which I believe belonging to the sparrow family.
That’s not the end of the list, indeed. The list you have read above is just the ones that caught my casual eye sight and the missing once could include many other friends hiding underground, the ones like earthworms, invisible microbes, etc.

As I read the ecosystem closely watching it, the days passed by, I slept everyday with a sense of an untold satisfaction. Suddenly, one morning, as I was in a hurry preparing myself for the day, I rushed to the backyard hearing a strange noise. Sadly, I found him (the chameleon) helplessly trapped in the mouth of a cat. I felt sorry for him (the chameleon) but ultimately he served his purpose of sacrificing himself towards the balance of the ecosystem by completing the food chain being the food for a cat. Having said that all, there is a secret that lies behind, do you know, the more you talk to the plants they grow much faster and better, well amazing isn’t it?
Lively, energizing, thrilling and enthralling as the ecosystem as such emerges, connected me with the Mother Nature more than ever before! The satisfaction and the pleasure one would get owning an ecosystem is something unimaginable.
Owe to own an Ecosystem. I own one and would you?