I Was A Good Husband Till I Murdered My Wife... 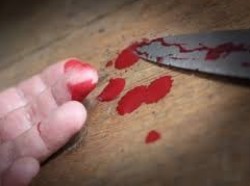 
Tags: Inspired Fiction
Sign In to know Author - DAVID .A
Spread the word ...