If I was a superhero! :D 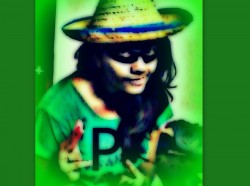 Supersuit: Consists of a normal green t-shirt with "P" across it, a beach hat, jeans and converses, and laser-specs.

Base of operation: Her parental home's basement

Origin: Frustrated by incidents of violence across the country, she decided to take matters in her own hands and tried to fight a menace, ended up almost getting killed, next day she woke up on the street with her powers.

Warning: Danger to unwary guys who even think of molesting someone, they never see her coming.


Sign In to know Author - PERCY KINGDAWN
Spread the word ...

KAUSTUBH RAMTEKKAR
What would have happened,if the name of topic was 'if i had a Doraemon' ?? lol~
nice written albeit~
December 21st, 2013
NEETI
Awesome awesome :D
December 21st, 2013
Author
@Kaustubh Not a fan of Doraemon, but you can go ahead and write it. :p