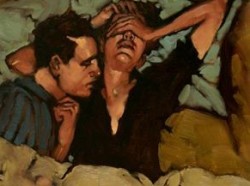 I was going through an article on "Why pre-marital sex is a risky thing and thus wrong". Then I thought to myself what isn't. I started writing in comment section about it. It became too large for that. I am posting a copy of it here. I welcome all criticism or any strong positions about the matter.

"I do agree with your point that we as a society is bending towards immediate gratification. There are huge gifts for people who can delay gratification as was proven in marshmallow test (throwing in a bit of psychology myself :p). Monks train for years in Himalayas to get over our primal urges. But the fact is most of us in this world can't. Most people like me don't have the arsenal for that, I was never taught to control my desires, which are there, which I believe are core to Human Spirit. But the society says control it, hide it, don't masturbate, don't think about her that way, she is holy, its not our culture. This continuous suppression of emotion and the taboo around it fills many people like me with guilt, shame and sheer helplessness . Freud has also said "Any unexpressed will never die, it will manifest itself in other forms." And that is a tricky situation. Either teach me how to control my urges for sex, fast food, of acceptance, and other pleasure which I admit are momentary, or go the western way i.e. to take guilt out of equation. Its human, everyone does it. Your and your Family's respect has nothing to do with your sexuality.

Sex is designed to release oxytocin which is a mind blowing stress reliever , reduces chances for heart attack and establishes trust between two people. Yupp its about two people extending trust to each other. Yes that trust is broken sometimes and yes it hurts like hell when it does. But we don't stop extending our hands for trust after that in life. Sex should not definitely be the only pillar on which a relationship should stand but that goes for both before and after marriage. The same thing can be said for anything like money, possessiveness and integrity. Sometimes I feel that people who haven't tried sex assume that they will be bad it, its not like that. Sex is a part of a relationship, a beautiful one at that. Research shows that conversation that people share after sex are some of the most deep feelings that they haven't shared with anyone before. For we, the men, these are much more important than the sex itself because sadly the society which gives us our morals also teaches men to inexpressive statues. On morality Nietzsche, maybe the best Philosopher to walk on earth says ".. morality is a hindrance to the development of new and better customs: it makes stupid people".

My third and final point is the attitude of those who are saving-themselves-for-marriage. A colleague once in a dubious tone said "I don't need someone who have has a swimingpool (referring to all non-virgins) there since I am pure" Pure! are you Desi Ghee or what? . Unfortunately all the saving-myself-for-marriage people are self-righteous, because they have made their sexuality a matter of principle. Everyone who is not a not virgin is not good enough for them. They become this authority on character certification based on just a single litmus test. By not making sex a priority, they make sex the priority. Why?. Different people have different diets, if two mature people decide that they have similar diets. Just a thought.

In earlier Indian civilization where Kamasutra was written and where temples Khajurov temple still exist. People wouldn't be like lets not talk about sex, or give any importance to it and we will have great relationships. Because F*ck Biology! What they did was make sex a common place thing which was in the open and not something only animals do. Let's just be open to all things right now. Each to his/her own. "You love sex". "Okay". "You haven't tried sex yet". "Thats awesome too".