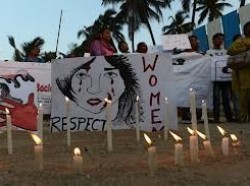 Women in India are always subjected to one or the other form of abuse. I write it today in response to yesterday's hullabaloo on releasing the documentary "India's Daughter".
I happen to see the fifty minutes and odd documentary and have mixed feelings on it.

Firstly, I am a lady and I do hangout with my guy friends and happen to see nothing wrong in it, probably because we are like-minded and respect and know our limits. Well these monsters on the documentary had no sense of remorse or guilt, on the other hand went on to give an explanation as of why this crime was committed. And the reasoning so bizarre!

This documentary shamed them in public, which they deserve, but they are such class of people who would be happy because they got featured and broadcasted in a film!
Our parents and culture always teaches us to forgive, but it is given only to people who feel guilty, it is not something that can be passed as easily as passing an heirloom.

I happen to believe that being an uneducated the rapist spoke non sense. But I was into a shock when the defense lawyers spoke on the similar lines. First of all who are they to teach anyone any lesson, a liability to the country, they are !

But then I tell myself, birds of the same feather flock together. So, no wonder the rapist has a lawyer of his own class. The government is afraid of the documentary being telecasted, for all of them share the similar views. You go to a policeman to lodge a complaint, he looks at you not as a person but as an item, okay if it were so , why doesn't he to do the same with the womenfolk at his home. That is because there is a sense of belongingness. When a girl undergoes medical examination to determine rape, the women themselves aren't considerate, at least they could be is not abusive. Here again nobody empathizes.

This International Women's day, to all the ladies and gentlemen, I would just say start empathizing people around you and develop a sense of belongingness. If you have committed a crime or made a mistake please have the guts to accept it and take responsibility.

VISITING FACULTY
As far as I understand:

The root cause is the insensitivity( or resentment) of one group of people towards another who think another group to be too different from themselves to be right( or moral).

The reason maybe any and it can be many. We need to find out to the reasons, atleast few of them and try to figure out how can we fix those cases. It can start with a series of case studies. Maybe we find something common in those cases.
March 6th, 2015
DR SACHIDANAND DAS
The incidences of women abuse are far more during the last 10-20 years than in the earlier years. We did not even hear of the things that are common place in the present day society. I can assure you the reason for this type of happenings is because of the huge flow of free information through all media. Real thing behind all these is money and the desire to make as much of it as one can by hook or by crook.
March 6th, 2015
SUNITA UPD
This is because woman however tries to get equality with men. She won't change her nature and men will always have power on her....
March 7th, 2015
SMRTI K
The government certainly cannot shun the voice of the people by banning a documentary that gives a wake up call to take a stand against the evil rampant in our society. I absolutely agree with the author when she says that the government shares the same views as those of the uneducated rapists. Otherwise why would they ban such a documentary? I believe every Indian should watch that documentary and feel ashamed of the image that has been created about this country and develop a sense of humanity. The people who are blindly shrugging off the situation are the ones who need to adopt a humane and liberal mindset. You just cannot absolutely ignore a situation. Why not face it and come up with solutions?
March 7th, 2015
Login to comment
2   ·   11 feedback ( rating and remark )
You can also write on WriterBabu. Know More.