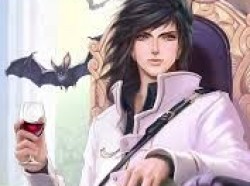 *mostly for people who are twilight fans and/or my fans :P

It started to rain. Her angelic, sparkling eyes made me nervous. I couldn't believe I was doing this to her. She, unaware of my intentions, was smiling innocently at the many droplets of water that fell gently at the soft pink petals of the sweet-smelling bunch of roses in her hand. Her pink cheeks turned pinker still.
On our way back home from the park, all I could think of was how cruel i am. Just how inhuman. Every time I looked at her, guilt killed me. I was killed a thousand times. But she was going to be killed only once. Somehow, I didn't want that to happen, though, I couldn't help.She spoke to me about a lot of things, repeatedly asking me questions to which I didn't reply. Not that I didn't want to but she wouldn't pause. I remember her telling me once that it is "girls' nature" to speak without pauses, whether or not you listen. So, I could only force a smile on my pale face. My blue lips relented to curve back as I continued to listen.
Before entering the gate, we stopped. I gave her a quick look and turned my face away. I was shaking inside out. From the corner of my eye, I noticed how irresistible she looked. I closed my eyes and pulled her close. the next moment,she was lying unconscious on the wet ground. Instead of water, I could see blood filling the cracks on the roads. I had finally done it, though, unwillingly. However, my relentless thirst for blood wouldn't stop me, not allowing me to be who I was. It is difficult to be a vampire. It hurts but we need to relinquish our feelings.