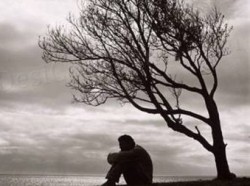 It is all dark- not only the room but the whole goddamn world. Probably there has been a load shedding in the locality as he doesn’t see the street light illuminating his opaque window panes. He doesn’t know what time it is. But the ticking sound of the wall clock is clearly audible. For how long he has been staring through the open window he couldn’t fathom. The sky was clouded, not a single star could be seen. The moon has taken refuge in the lap of that big wavy cloud. Sometimes it is peeking though the cloud as if playing hide n seek . There is a pin drop silence in the whole nature, not even a cricket is buzzing. The cool after rain breeze is filling the room, giving him almost a chilling sensation. He has been laying awake, waiting in another sleepless night. It is not the first time he is having them. But he doesn’t take any pills in spite of having a bottle of it. His health is deteriorating; a light dark circle around eyes, paleness and a never ending fatigue has crawled in his life.
He spends most of his time in his personal study cum bedroom in the first floor of their New Alipore house. His parents have tried to talk him into seeing a psychologist for counseling. But he always avoided their concerns. Nowadays he doesn’t talk much with them .He prefers to be left alone in his exile in the 14 by 12 bedroom. Addiction of smoking has curled in his boring life which he himself does not want to carry on. He has turned into a pessimist. Yes, he had a heart break, but not from his girlfriend as he never had one. He was agonized by the two most loved and important persons in his life—his parents.
It was a nightmare for him when everything started back in his childhood. Both his parents are quite stubborn and that was the main reason for problems that emerged in their married life as well as his pathetic life too. He guesses they were never a happy couple. They have lived and still living under the same roof, but all for the sake of their only son. They might have thought that their kind sacrifice, a compromised truce, would at least lighten their son’s burden, that they would give him some peace and an unaffected childhood. But life is not a sweet dream so he had to suffer, a lot to be said fairly.
In his 18 years of existence he has lived through hell, never ending quarrels between his parents and cold atmosphere in his home. For last 10 years it was at its worst. He never had a tour in this period and not a single day of peace. His dad personally has tried to take care of all his needs, always enquiring about his well beings. His mother has cooked for him, his favorite meals each day. But when heart bleeds with sorrow and grief, materialistic happiness or care doesn’t count that much. In his early teens he used to weep for his miserable life, sometimes praying and complaining to god for his condition. He hoped against hope that may be one day everything will be settled and life will be as it should be. In years to come tears dried and silence and cigarettes took its place. He was always a good student, in a way or other fulfilling his parents’ ambitions. But it was another struggle for him to concentrate in his studies when his family was almost tearing apart.
Every night he thinks of his life and all the events come into his mind like snapshots of a movie. But tear doesn’t fall down now, only some extra cigarettes burn. The smoke and the smell, adrenalin pumping through his veins and the trauma of haunted memories cause him hallucinations.

The big Ben ticked and signals 5 ‘o clock in the morning. He washes his face and watches the sun radiating its first warmth over the horizon. He goes to the drawing room to fetch his mobile which he might have left there last night .Instead he discovers a document of divorce agreement laying in the tea table of the drawing room. It is filed by his father and already signed by his better half.
“ So finally its happening . After so many years of pleading, crying and begging before them for an alternative, they have sealed my fate this way.” He thinks, almost breaking down. To his own surprise cold drops of salty tears has appeared once again pouring over his pale cheeks. Then he decides and starts to write in the writing pad kept there-
I wish I have other alternatives but I don’t have one. Just like you. May be it is for the best. I wish I could let you two get the divorce when you first thought about it almost 10 years ago. I delayed you failing to understand that you both are suffering in an unhealthy relationship. You sacrificed a lot for me.I never have wanted anything but a happy family like those in which my friends belong. I was always jealous of them for this happiness which I crave most, still now.
Success , money or any other materialistic pleasures cant compensate for the childhood and the teenage that I have lost, that every normal kid gets. Nothing ever will soothe me, you know, at least not in this life. So its time to start new, its time for salvation.
Your beloved, Rony.

His voice is choked with emotions while writing. He peeks into their parents rooms for one last time noticing their faces with his moist eyes. He locks himself in his room and takes the whole bottle of sleeping pills in his hand. Lying in his bed he looks at the dawn and smiles and with a mouthful of water he empties the bottle. With an ache of pain his whole body shivers and he closes his eyes. Then finally ending the insomnia he sleeps calmly not to wake up ever again.