IS MEDIA BECOMING DIRTY TOO? 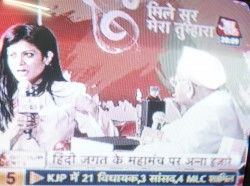 I Would first like to express my deep Regards for this Media Channel as they are the Voice of the common people like me in the democracy. i have been watching this channel since childhood.I remember that i felt great sadness on the sudden Demise of Mr. Surendra pratap Singh who was the News reader on this Channel, In the year 1996 a 30 minutes News show was very popular named aajtak.
In 12 years this channel has reached a great height and success.
"SABSE TEZ' my best wishes for the team aajtak team who are really working hard days and nights to reflect society's image like a mirror and helping citizens fighting for their Rights and Justice.

Being a regular Viewer, i think i have the Right to ask a few questions to this media person, who is intentionally trying to create a negative environment in the nation on the issue on Anna-Arvind kejriwal's Separation.

Now,My QUESTION is : Was she trying to provoke anna ji to make him speak something against Arvind kejriwal so that she can Run on her channel as 'Fresh News of Clashes between Anna and Arvind' BREAKING NEWS: clash between Anna and Arvind?
Will she she get higher TRP for her Channel after making such provocative wrong comments on the national Television show?

Is that TRP which she earns by such sensationalized comments going to make her more popular in the eyes of her Bosses , hence Promotions like Managing Editor and greater Personal Development?

The News of Arvind Kejriwal Forming a political party is known to everyone. How can you SENSATIONALIZE this issue when you know that Both of them have been Fighting against Corruption in India for last many years.Its just Now they have chosen different ways to work for the same Cause.

How could you tell Anna ji that Caps are today coming with the Quote' à¤®à¥ˆà¤‚ à¤…à¤°à¤µà¤¿à¤¨à¥à¤¦ à¤¹à¥‚à¤ '? I am sad about the behaviour by the Media person of such a reputed media House. This is a False/ wrong statement, there are no such caps.

I do understand taht its a part of your job to provoke people and making them speak something sensational but c'mon! its a very serious issue for the common man in the country today. Kindly Dont create Clashes between Anna ji and Arvind kejriwal in the mind of the people.

You being a media person, i dont expect you to come forward openly and to support Anna ji or Arvind ji for this Fight against Corruption But at least have some Sympathy for the common people of India, who have their last HOPE alive after 65 years of suffering.
It took several years and many sacrifices by Anna ji and Arvind ji for such a Level of Mass Awakening in the country. Its my humble request ,please do not try to Create the feeling of Indifference among people about the Hope of Corruption free India.Because, By such News, a common man tries to keep himself away from such issues, they can not come to Ram Lila ground every day shutting down their shops and taking off from their jobs. Do not let their Hopes DIE by making them think that its all useless and fruitless efforts what their Leaders are doing today. In a way, you are making their Morale down that they should support great leaders who are exposing corruption and Fighting against corruption.