Journey of a Lonely Girl Part-1 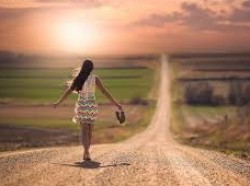 hi guys,
I don't need any sympathy as such. This is just something I need to get off my chest.I am an Indian girl. I have a elder brother who is in love with electronics. Electronics do not interest me as such. Being from an Indian family beating up of children has always been a "tradition" as to oppose wrong decisions taken by the children. During my childhood,my head has been banged against the wall, i have been kicked,beaten etc by my mother and father a lot.They never said sorry... I was always hurt and met by thoughts of anger,suicide and revenge. I was never one of those people who believed in committing suicide as I always dreamt of having a wonderful future ahead of me and imagined the time i would be 18 and would be living by myself. As a result of which,I started stealing from my mother's purse.I believed that I was merely teaching her a lesson.I had forgotten the difference between what was wrong and what as right! this went on for like 4 to 5 years. i had been caught several times before and beaten up which motivated me to steal further.By class 6 and 7 i had begun spending money so much that i was addicted to chpis and could nt live a day without it. Now i am glad to say i have freed myself from this unhealthy addiction......
But is this right? beating up a child? also, i had lost m,y life back then, i detoriated horribly in studying and my self-esteem fell greater as i had begun to fail but my brother still topped.All the members of my family ignored me and i was the black sheep of the family,I was undergoing depression so bad,but no ine gived a fuck.... i had continuous clashes with my mother so she took me a psychiatrist which dwindled the slef esteem that i had. I had no interest in life whatsoever but took a great interest in wroting poems,watching television and eating chips.my mom also shamed me several times during my periods, I was just a girl of twelve years and when i got my bedsheet stained she threw out of the house and announced this to every one member of my family :'(
anyway in class 8 i had amazing friends. after the first semester I was embarrased of my marks, I had started to avoid stealing at any cost.I have a geeky like apperance and so people thought i was good in studies and started asking me answers to questions in exams. I did not like not knowing what they asked so i started studying. Also around that time, I started taking science tuitions from my friend's mom. I reallly loved her. So mixed with feelings of topping and making new friends,I somehow got my life back. In the last semester i topped biology and overall ranked 17 out of a 40 students.... it was a start.Next year I was put in a class with academically more excellent students. For the next two years I slogged day and night. I was awake till 2 in the night and woke up at 8 in the morning. I studied a total of 12 hours everyday. Yeah, there was certainly many distractions along the way and well i was not perfect.On most Saturdays I only managed to get an hour of studying done due to my addiction to television. But now it is the end of the semester of class 10 and in my boards i might score a score of 9.2 cgpa and I couldn't have been happier.
thank you guys so much for listening! this article actually made me ralize how far along I have come in life. the main reason I started writing this because i was really sad now, because of an incident that happened an hour earlier.this article just made a huge burden off of my body. If u want to read about the incident i am going yo be writting an article part 2: journey of a lonely girl!
Thank you for reading :")