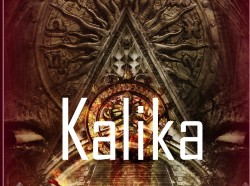 If there was one thing Kalika never failed at, it was blending in. Unlike most attention-hogging people, she preferred being in the shadows. This could cause problems though when she had to do something that required public attention.
As usual she has been walking along the school hallway minding her own business when this crazy art teacher passing by called her, "Hey you, from class 11-C you are, aren't ?" So what if the school administration didn’t mind that in an English medium school, the art teacher couldn't even form coherent sentences.
She was tempted to lie, but if there was one thing she wholeheartedly respected it was truth and the sense of responsibility.
She nodded her head in defeat glaring at the huge pile of flyers in the teacher's hand.
"Distribute them, will ya?"
"Of course.", Kalika sighed and held out her hands as the teacher smiled and transferred the pile, the white papers contrasting with Kalika's dark hands.

She walked into her class, a shiver passed through her spine as most f the class turned to face her. She felt as if she had shown up for school dressed as a clown. All the chaos in the class had ceased for a moment and then as she turned towards the first seat and placed a flyer, the cacophony was back.
Just like that.

Her face lit up as the eyes left her face. Times like this, she wished she was not a loner, She wondered about having a friend who would come up to her smiling, divide the pile and help her out. No asking required.

Snapping out of her daydream, Kalika finally took one flyer for herself and placed the rest in the teacher's drawer.

Glancing at the flyer it was for some inter-school fest, her eyes caught the bright red letters exclaiming 'MMA novice training camp' and underneath in a smaller font was 'Volunteers required'. Her lips pulled up into a smile thinking of teaching her juniors. MMA was something that gave her a lot of confidence enough to brave attention. She smiled sarcastically knowing that no one would understand how a girl her age and stature could be as skilled and powerful in MMA. People didn’t have the heart to appreciate her inner 'Goddess'.

MM
nicely written
January 26th, 2013
ANKUSH GUPTA
not the storyline, but the way it is presented makes it worth reading!!
February 3rd, 2013
Login to comment
2   ·   12 feedback ( rating and remark )
You can also write on WriterBabu. Know More.