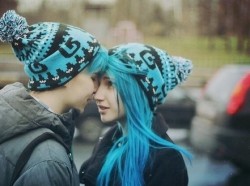 She had been sitting on the bench for a while, no one seemed to notice her. Her dark hair was a mess, her eyes were dead and her lips dry. She was staring at the lake lost in thought. The wind rustled some leaves which landed on her sneakers. The lake was silent like her. Dead. Silent. With not even the slightest ripple.
No one saw her, noticed her, except him. He stood at a distance and watched her. His stormy blue eyes resting on her pity state. He walked up to her and sat beside her. She didn't notice him. He finally made his presence noticed by saying,"It's been a while sitting here. You should go home."

She smiled ruefully,"There's no home anymore." She was still staring ahead.

He replied calmly," Why do you say this?"

She finally looked at him and took in his features. Besides his eyes, there was nothing extraordinary in his face. He was just an average-looking boy. She replied,"Because I'm tired...tired to hold on...tired of not letting go."

He waited for her to say more. She continued,"They keep on hurting you without realizing how much pain they can possibly cause you. But we bear those wounds because we love them and simply we don't want to let go of them. And what they do? Keep hurting you more."

His eyes were fixed on the lake ahead and hers on his face. There was a silence, a silence which demanded to be disturbed. He finally said," And one day they hurt you so bad that you break. The wounds and scratches always remain on the inside reminding you of the pain. But that does not stop us from loving them, caring for them and missing them because they feel the same about us."

She continued,".....but sometimes they don't. What if you are the only one who is holding on. If you let it go and walk away, you know, no one will come for you. But you need them and you never let them go for the simple reason that you cannot do without them because you love them."

He watched her. So simple yet so beautiful, he thought whilst looking at her. She looked at him. So ordinary yet so intriguing, she just thought listening to him. Finally, he broke his gaze from her and replied," But sometimes, just, sometimes you feel you need to let them go to see who comes after you."

She shook her head in a 'no' and replied, "But sometimes, just, sometimes you feel the need to let them go because you are tired and you realize you are nothing to them. That it's time to walk away..........."

After saying this, she stood up and walked away leaving him behind doing exactly what she intended to do....walk away...leave everything behind..let it go.

He watched her leave and then suddenly got up and ran after her. When we caught up with her, he started walking slowly beside her not letting her know of his presence.

She continued walking not aware of the fact that somebody had actually came after her and for her.....


Sign In to know Author - TANVI KAUR
Spread the word ...