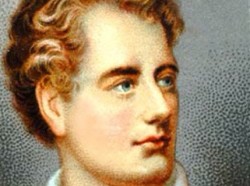 Byron is regarded as one of the greatest British poets, and remains widely read and influential. He travelled widely across Europe, especially in Italy where he lived for seven years. Later in life, Byron joined the Greek War of Independence fighting the Ottoman Empire, for which many Greeks revere him as a national hero.

He also fathered Ada, Countess of Lovelace, whose work on Charles Babbage's Analytical Engine is considered a founding document in the field of computer science.

Lord Byron once said- "Sometimes the characters who are “mad, bad, and dangerous to know” make the most compelling protagonists. " While we can’t say we’re not itching for a novelization of Byron’s famous romantic exploits, we’d almost rather read a book about his school days — which might feature the story of how a young Byron, new to Cambridge, had to send home his beloved dog when school officials cited rules against keeping canines. Not to be outdone and apparently desperate for furry companionship, Byron instead acquired and kept a tame bear, having found no mention of bears in the official statutes. When the administration protested, Byron even tried to apply for a fellowship for the bear. Hilarious ...!