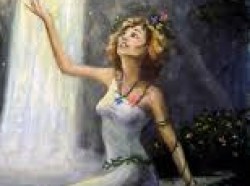 I was there, hiding though
Making her feel unaware of me
She was walking, and things were strange
Her steps were causing nature to change
Flowers were adorning her path, themselves
Birds were chirping, all as holy bells
She touched a small bud, touch gentle as silk
It blossomed into a flower, color, pinch of orange in milk
Anklet then touched a dead tussock, from yellow it turned green
Vibes, after passing nearby her, carrying fragrances of world, unseen
She then went to the pond, lilies and golden fishes in it
A magic was dragging me, I couldn't resist
I was there, hiding though
Making her feel unaware of me
She sat on its wall, splashed few drops on her face, her lips, finest curls
Amazed was I, after touching her, they all were pearls
Magic was all around, blessings in the air
Her gestures were nothing but epitome of care
Her fingers were playing in the water, stirring it, making waves
And clouds in the sky were all gathering, taking magical shapes
On my knees I bent, bowed my head to that fairy, couldn't hide
She was beautiful, gracious, perfection personified
She came near, touched me, I was all calm, no contemplation,
Bliss was there, I was witnessing peace, satiation,
Closing my eyes, I was feeling the warmth, the affection
She was the princess of land and skies, the goddess, Mother Nature