My First Marathon with a twist- Ironman, Sweden 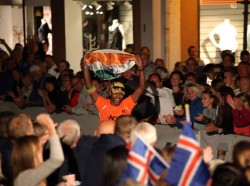 The night before race day I was very much afraid, I put up 3 online alarm in my laptop and connected my mobile with a speaker system so that I won’t miss it. That night I was very excited as well knowing the fact that in matter of hours I won’t be the same Saurabh, I will be Ironman Saurabh. I was very absolute in my mind that I will do it and it will happen.
So with all the alarms in place I woke up at 3.30 am early morning. Did a light breakfast and made a few important calls to friends and family as this was not that early in India (around 7-8 am) I made ready all the things to be taken to the race starting line and reached their on time. Checked my bike, corrected air pressure in tires and double checked the bike tools for emergency if so whatever happens.

My mind was all set to do a great job and to follow the thumb rule “keep eating and go slow” for my first Ironman which I decided sitting with Kapil Dev Singh, IIT Delhi Alumni and a marathoner. My background- I have only done an official half marathon till date and it was gonna be my first full marathon with a little difference that it has to be done after a warm up of 4 km swim and 180 km bike.

So I got ready with my wet suit up and putting lubes at the extremities to avoid friction. I was quite excited in my heart and calm in my mind feeling ready to go . The good thing in swimming leg this time is that they have made it a rolling start where every participant can seed him/her self according to their respective probable swim timing. So it’s a really good move to remove all the mess that happens in mass start in open water swim. There was one advice given by the host which was very true saying that the anxiety remains only till start and once you enter into water all of that vanish away in seconds and that’s what happened. There was rolling arms all around in a matter of seconds and legs splashing water. In some time I was also comfortable in the water and making my way overtaking a few from the sides. My goggles were quite foggy and I was following the flow of the masses from sideways and that’s why I ended up doing 4.5 km swim instead of 3.86 stipulated distance. Difficult times were when you have to take turns around buoys which happens to be converging point and having maximum chance to get hit by someone and there I got hit by a swimmer with his whole foot press against my right eye and I got blinded for few minutes before I tilted a bit to clear water from my goggles. But anyhow I finished the swim leg in 1:34 hrs and came out quite confidently.

Did a quick transition and up on the bike for the longest and most treacherous leg of the race. I started with a good pace of 30 Kmph but was remembering the point of keeping it slow. My plan was to finish with an avg of 26-28 Kmph and I was going strong. Then started the windy section and I guess I wasn’t prepared much for it as there are no strong winds in Delhi where I trained. I was not knowing how it feels to ride in strong winds and how much should I push myself. I decided to play safe. Kept reducing my pace and it was heart breaking to see people going past me in a leg which was supposed to be my strongest area. But I was sticking to my thumb rule for my first race ‘keep eating and go slow’. The course was wonderful with a beautiful scenery on both sides running parallel to the coast line of Baltic sea for the first 112 kms loop. As per people of Kalmar this happens to be the biggest festival of the year for them and I guess almost 50000 people were out on the road sides along their farms with drums, and other musical instruments and were cheering to the fullest to all the participants passing by. You can’t miss the energy of the local people even if you are riding at the last of the peck. I always feel happy to see the aid stations which were available at every 20 kms as I use to pick a half banana or power bar and an isotonic drink from the energetic volunteers. Winds were getting stronger with time and there were certain stretches where it was open fields on both sides and cross winds as well as head winds were taking toll on riders. Then came the rain. It was good to get rain I guess, it was a pleasant feeling but it makes your body cooler and you need to conserve your body heat in such a cool weather. But the key thing is to stay determined and keep riding anyhow. I was keeping a calculation in my mind and I was good to go by that pace and was really keeping myself on back foot as I was not knowing how my body going to react in the later stages of the race. So I kept it going and soon I finished with the bike leg in 7:20 hrs surviving all the strong winds and rains and an uneasiness from my bike as my front derailleur was making some annoying noise the whole time.

There was an uneasiness in my stomach for last 30 kms in biking section and I started believing that my stomach is blocked but I was wondering why is that so as I have taken proper care of my nutrition and hydration. But when I reached the transition area after finishing bike leg then I got to know that it was not a stomach blockage instead my bladder was full and shrieking to go and pee. When I did I spent more than a minute standing there emptying it out. So yes I was happy that I didn’t mess up with my nutrition part.

Now starts the running part and I was feeling all good in the transition area and happy to enter into my final leg. I did a quick transition and started running. The best part of the running leg is that it has been organized with an excellent thought of making it passed through the center of the town 4 times, packed full of the enthusiastic crowd cheering for you in the whole run. So every time you pass the crowd you will feel as a celebrity giving high fives to the kids standing on both sides of aisles. Rule to be followed in the run is to walk every aid station which lies at every 2 kms and have energy drink, potato chips, energy gels or bars. I was running with an average pace of 7 min/km. The biggest motivation for me was coming from the people of Kalmar who were surprised to see an Indian participating in that race and every time I pass them they were shouting aloud “Go India Go” as My running jersey was having a print ‘INDIA’ in front in big bold letters. I was happy to finish 30 km and was waiting to hit the wall at 32 kms which is very common with every marathoner but I was surprised to not find it in my case. At 36 km mark I started feeling pain in my left knee, I was having a good enough time to complete it in 16 hrs so I took it easy and started a mix of brisk walk and easy run and my average pace falls to 8.5 min/km. Very soon it was the time to cherish the moment that I was training hard for, it was the time to run on blue carpet, I stopped for few seconds, took out Indian flag and a banner with my supporters names printed and started running, I was filled up with joy and emotions enjoying every bit of that moment which is exclusively for me. I finished the complete race in 14:37 hrs and passing through the finish line I feel so much of self respect that can’t be explained. Then is the time to go for a cold or hot water bath, massage and stuffing pizza and high calories food. In the end I would just like to say- “stay motivated and keep motivating” is what I believe in.