My Tryst with the Street 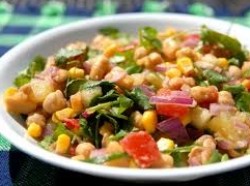 I have something to admit. This hard truth had many of my friends clutching their hearts in horror. The simple truth was – in all my life I had never had chaat.
That expression on your face; yeah, I get that a lot.

Aah yes! Those plates of spicy pappad, chips and puffed rice topped with pieces of luscious tomatoes, channa and green chillies; those wonderful spongy buns with lemon topped paav; and those miniature puris with their sweet and spicy filings that drip off the corners of our mouth as you bite into them – yes they were as foreign to me as haggis and escargot.

A weekend trip to the city had us stranded as the clouds suddenly opened up. All hell broke lose as we scrambled for cover. And as luck would have it, the only cover in sight was a small chaat-waala’s shop tucked away between a soda stand and a stationery store.

“Perfect!” declared one among the gang. “What better opportunity to introduce you to the world of chaat?” she asked thumping me on the back. “Carpe diem, kiddo,” she said.

In the twinkling of an eye, decisions were taken, orders were given and I was holding my first paani puri gingerly between two fingers. I watched as my friends popped whole puris into their mouths and grinned sheepishly as the spicy water dribbled off their chins. “Go on. Pop it in,” urged the well-meaning friend. I felt like I was being initiated to a cult!

Six pairs of eyes watched as I raised a soaked puri to my mouth. Open that hatch, fire in the hole. And then I chewed. Crunchy, I thought, for something so soaked. And then it hits me. The spicy sauce, the chewy filing, and the crisp puri – it melded to form an orgasmic explosion in my mouth.

My mind whirled. How could I have spent all my life away from such glorious food? How could it have eluded me so? Oh spicy seductress, I am thy slave!

I wipe off the sauce that drips off the corners of my mouth as I’m handed another dish. Paav bhaaji, I hear someone say. To me it looks like a little toasted bun with potatoes inside. Funny little sandwich, I muse. Boy was I wrong.

That little sandwich was a ball of lemon zest, potatoes, onions and tomatoes wrapped in a blanket of perfectly buttered bread. To my friends it was paav bhaaji. To me it was the beginning of a love affair.

My trysts with chaat became more frequent after that. I hankered after paani puris and chaat. Bhel became another companion. Hell, I even learnt to throw together an instant bhel as a snack.

I will never ever forget that rainy afternoon. Those miniature explosions of taste in my mouth; that seductive mixture of sweet and spice. That afternoon I forayed into the wonderful and amazing world of chaat.

ANKITA NADUVINAMANI
Ahhhh!!! There can be no better description of chaat than this.Lines of speechlessness.:)
September 1st, 2014
Author
Thank you Ankita Naduvinamani. It's a completely true story ;) .
September 1st, 2014
Login to comment
2   ·   5 feedback ( rating and remark )
You can also write on WriterBabu. Know More.