Next station: Your lover 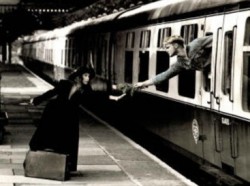 I was on the metro this afternoon, coming back from my CAT coaching classes. I was listening songs on my phone and I got a text- "where are you lost?? Look up!!"
At first I didn't notice the name and immediately started to search for a known face in the overcrowded train.
As I looked straight, I saw him. Yes, HIM.
I immediately looked at the name of the sender and confirmed. Undoubtedly it was my lost love.
The guy I deeply madly crazily loved, was in front of me.
He was looking at me, smiling.I smiled back. Stood up and we started talking.
"How are you? And going where?" he asked
"I'm okay. Going back home. What about you?"
I replied casually
We were talking after a year and had met after two years. That too accidentally.
I was happy from inside but it was a different kind of happiness that I couldn't express. I was disappointed too, at the same time. He behaved so casually as if nothing had happened. And somewhere or the other I did the same.
He disappeared two years back, leaving no explanation only to come back with an excuse after six months and then going away forever.
I could see nothing in his eyes, while I was afraid that he would see every hidden emotion in mine. I tried a lot to control.
I had decided to tell him my feelings whenever we meet and it was the best chance for me.
But I wasn't lucky enough, my station had come.
"I've to go. My station has come" I said
"When will you meet me next?" he asked immediately
"I don't know. Let's hope to bump into each other after another two years" I tried to be as rude as possible
"I want to meet you tomorrow"
"my station has come. Bye"
"wait. Don't go"
"what?"
Doors opened and I stepped out
He was still standing inside. Somewhere inside I wanted him to step out and complete it. But he didn't. I was shocked on this behavior of his. These two years had left me heartbroken to such an extent that I had stopped caring about everything and everyone. I couldn't understand why the fuck was I thinking all that!
The final bell rang for the doors to close and I started to move away from him while he was still inside.
I wanted him out so that I could run back to him and hug him as tight as possible.
And he did. He finally stepped out. He called my name to stop me.
I did stop but was dumbstruck as to what he wanted now from me. He had taken everything from me.
"what happened? What are you doing?" I asked in a firm voice
"I know it's been long and all this doesn't matter"
"when you know it doesn't matter then don't do it. It had never mattered for you. Then why this behavior?"
"I miss you. I want you back" he said
"...." I couldn't say anything at first but not getting fooled by him I asked "and why this sudden realization?"
"I know I had done wrong but I'm sorry"
"Your sorry can't undo what's been done."
He said nothing and I continued after a minute.
"I loved you like mad. I was crazy for you. You didn't care back then. Then why now? Somewhere I still love you. A lot. But now it doesn't matter. It's all just gone"
"How do you want me to prove it?"
"I don't want anything from you. Please let me go. You've already done a lot of damage"
"I'll not let you go. Not this time"
"Why don't you..." he interrupted "I'm not letting you go at any cost"
"You come after all this time, after completely leaving me, not talking at all for months together. You meet me today accidently and talk about missing me?! Simply wow!"
"I can explain. I'll tell you all the reasons for doing this all along"
"okay.. start"
"You remember that day when..."

and then, suddenly someone's phone rang and woke me up from my dream. I enquired about the station and resumed back to listening songs, making sure not to fall asleep this time!