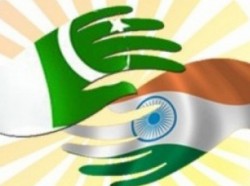 I will just tell a real life story. I was travelling from Singapore to US.I got a middle seat in plane where on left side a different nationality lady aged 35 sitting and on right side 70 year old Pakistani man was sitting.He was diabetic patient with problem in knees,over weight, not able to stand by his own.He required two seat belt to strap himself.
After seeing me,he asked in hindi (will translate in English) 'Are you from Pakistan?'
I smiled and said 'No uncle, I am from India just beside Pakistan '.He gave me surprised look and said 'I know where is India' and smiled.
As he was a diabetic patient,he had to go washroom in every half an hour.He was sitting at window seat.Every time,I was helping him to stand up and make sure he reaches to washroom easily.Lady who was sitting next to me, had to get up and clear the way when he was going to washroom and she was super pissed off with this.She used to make faces,mumbling etc.
After many time finally she asked me ' I thought Indian-Pakistani don't like each other then why are you helping him so much'
I politely said ' When I was born, my parents first taught me about humanity and respect.Hating each other do not change our this culture value for both the nations for sure '. She was embarrassed and did not talk to me afterwards.

For a class 8 textbook:
“The Hindu belief was that only a Hindu nation could live in the Indian subcontinent. Other nations should become a part of the Hindu nation or leave India. Many Hindu extremist parties such as Arya Samaj were working against the Muslims since the 19th century and even fifty years after the creation of Pakistan, these organizations continue working to erase the Muslims existence from the region”. Yeah Arya Samaj is soooo Taliban!!

Wait there is more to come:
"In 1965, the Pakistani army conquered several areas of India, and when India was on the point of being defeated, she requested the United Nations to arrange a ceasefire. After 1965, India, with the help of Hindus living in East Pakistan, instigated the people living there against the people of West Pakistan, and finally invaded East Pakistan in December 1971. The conspiracy resulted in the separation of East Pakistan from us. All of us should receive military training and be prepared to fight the enemy." Who is the enemy ? India !!!! Repeat after me, Who is the enemy? India!!!

How about textbook for Class 3 students:

"Muhammad Ali (Jinnah) felt that Hindus wanted to make Muslims their slaves and since he hated slavery, he left the Congress". At another place it says, "The Congress was actually a party of Hindus. Muslims felt that after getting freedom, Hindus would make them their slaves." See how we make slaves of Indian Muslims.

Now the good stuff, for Class 5 students:
"The British had the objective to take over India and to achieve this, they made Hindus join them and Hindus were very glad to side with the British. After capturing the subcontinent, the British began on the one hand the loot of all things produced in this area, and on the other, in conjunction with Hindus, to greatly suppress the Muslims."

Not all Pakistanis hate Indians, and not all Indians hate Pakistanis.

And for the reasons (from Indian perspective):

1) We are basically taught like that: Even though none of the textbooks or teachers explicitly say so, a feeling of anti-Pakistan is developed in the young minds. Young minds are easy to exploit, and they grasp such things quickly.

2) Portrayal in media: Whichever form of media, be it news, movies, or any other form , Pakistan is more or less portrayed as a nation of people who betrayed India.

3) People still live in the past, rather than in the present. Without even thinking about the fact that, both Indians and Pakistanis are alike in many many aspects, the hatred still continues to develop, because of what happened in 1947.

4) Mixing of politics with common people: People in India think that all the terrorist activities are Pakistani government sponsored, and more importantly, many are ignorant to separate politics from common man. Many fail to realize, that Pakistan is just like India, where the ruling political class is separate, and more than 99% of the people are ordinary citizens like us.

6) Kashmir - Citizens in both the countries are so much bothered about Kashmir, for who knows what reason! I could understand people in Kashmir being bothered about it, but the rest of the country, why?

There are many more reasons which I can point out, however all will point in the same direction- the direction of ignorance. Indians are not aware the actual situation in Pakistan, and I think that would be the same case for Pakistanis. We have a tendency of generalization, and when generalization comes along with ignorance, things go out of control, and pretty dangerous.
Tags: Motivation
Sign In to know Author - NIKHIL JADHAV
Spread the word ...