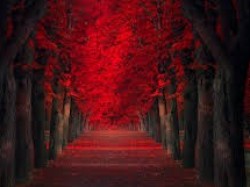 It’s been raining all day. Ending the blaze of summer the monsoon has come to renovate the nature to its beauty once again. Rony was lying awake in his bed beside the window staring at the watery canvas of the sky. The whole neighborhood is looking like a water-painting depicting the mood and color of monsoon. The street seemed like a shallow stream where mighty cars are running scattering the water to the sides. The passers-by are moving in the knee-deep water. Children from the next apartment are playing and dancing in their lawn, some are trying to float paper boats. They reminded Rony of his childhood. It was hell of a fun playing football in the rain in the muddy water clogged field. God! He misses that joy so much.
He feels feverish. During last one year he had lost too much weight and his condition have worsened now. Though Rony is pursuing engineering his true passion lies in something else. He wanted to be a painter. But nobody gave a damn about his wish. His father persuaded him to take engineering. He said a painter had no future and he did not wish his only son’s future to be at stake. Rony knows that most of the Indian parents feel that way. He fills that this lack of option and opportunity and understanding are the sole cause of destroying millions of hidden talents in this country.` Creativity- is it a boon or a curse, especially when you are born in a middle-class Indian family’ -that is the doubt he always encounter in his mind. He tried to accept his fate leaving drawing classes and almost stopped painting. But it had adversely affected him. He failed to concentrate in any work and became frustrated and irritated to his life. He got very poor grades in his exams and at the end of the second semester he was diagnosed with severe depression and mental stress. It was a major blow to his parents, especially to his dad. He never thought of this. He is to blame for his son’s condition.
“ Are you awake?”,his mom enquired, sitting beside him in the bed.
“Yes, tell me what you want to say.”Rony reluctantly answered.
“ I have brought you your painting stuffs .I want you to start painting once again. If you want you can even join Arts college. Your dad will not stop you this time. Leave that to me” His mom eagerly answered. She used to understand her son’s passion but was helpless but to submit to her husband’s decision. She wish she had protested when Rony was forcefully admitted to engineering. Had she done that Rony’s condition could not have become such. She has vowed to help her son with all her might.
Rony is delighted seeing the canvases, new brushes and colors. He hugged his mom tightly and said,” Thanks mom for all this. I am so happy.” His mom affectionately patted him and left for her daily chores. A new bright hope is seeded in Rony’s life. Those who are obsessed with their passion will always find their way to live by it. If heart can dare to dream, that dream will find its way to reality one day for sure.