Pen name- not just a name 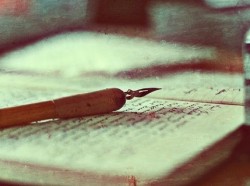 Every writer has a pen name of his or her own.The question is why a pen name when one has a good name from which the world knows a person.
A pen name is the marker of the personality of a writer. It gives a chance to a person to be known for his work and his thoughts. A pen name becomes identity of a writer to a world where the name suits his personality and what he actually is. A pen name is writer's own imagination, his own creation.It may sometimes overpower his own identity in a world where he is in panel of creators, an entertainer.

My story on writerbabu started with a pen name as i didn't want to reveal my real identity to my readers specially the ones who know me already. I was not sure about for how much time i would keep this a secret or whether i would be able to able to keep up with a beautiful name like i kept of mine. But writerbabu gave me something i really needed at that time a new me a new discovery of self, free from all thoughts of what will others think about me. It gave me a family of authors who think like me, appreciate me in a totally different way,people who make me feel grate about my thoughts and my writings,and never ask why and whats about it.
Writerbabu is a culture that has integrated with my new identity, identity as a writer, a dreamer, a thinker, and an enthusiast. It has given me a chance to be what i want to be. And now my pen name is not just a name its a reflection of who i am from within...