Piece of jigsaw puzzle that decided to b "ITSELF" 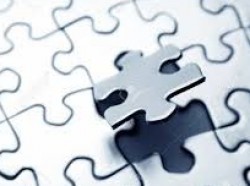 It was a game of only one thought, and tears rolled down her eyes. Yes, it had taken her years to practice "staying calm" in the most crucial and lethal turns of her life. But, now was the day, tears had to show up. She had never felt so alone in her life as she was feeling that day. She stood on a point where she needed appreciation, a buck up pat, a warm hug, and a reward for her sufferings. but, she suddenly realizes that she had none of it, and "Rest" didn't exist for her. There is no backbone to her where she could rely on. It has always been her OWN self who kept encouraging her efforts since when she was 12. Till this day, she only had a feeling of emptiness in her life, but now this emptiness seems to be a greatest loss of her life. Yes, she missed a family! Because family is the first and the last person/people you will ever turn to, either it is happiness or you are stuck in some problem! But she never had such a family she could rely on. She was 14 when she realized that her own mother could actually mock at her "crying". Her sister was a love, but she was ruled by her mother, and her brother was never bred properly to be grown up into a brave man! Her eldest sister was way far selfish she could ever imagine! So there never had been enough a feeling of a "family". She had never been asked what exactly her wishes or dreams were. She was that piece of jigsaw puzzle who chose to change her shape. She refined herself, and for that she had to "Fight" to escape the boundaries! There had been times when she felt alone but then she had a reason to "continue". But, today, she is blank. She has got no one to look up to for advice. She had no one to tell her "I am here for you". She has no one to ask "what are your future plans dear" She has no one to tell her "you have come so far, let's have some rest honey". Even after struggling through 22 years of her life, she was at the point where she felt at "loss"! She learnt it a big deal that life is not that simple as she had thought, you have to sell yourself in order to survive in this world. This world seems so strange and cold to her now! This coldness and harshness of the world has now homed itself inside her! Snatching away all her emotions, this world has turned her into a callous and aloof person which is equivalent to a living dead (for her). She feels lost in her lost thoughts. She needs to cry but she can no more! All her stamina is squeezed away! She just needs to be by herself now! She really now "pays a damn care" to anything and anyone at all! People think she is silent, rude, and loud when she speaks. But believe me, there is much more to her than these absurd words! Better not judge a person if you don't really know what he/she has been through!

"You close your doors of kindness, and then you say the person is arrogant!"

Tags: Standing up for yourself is not a child's play
Sign In to know Author - Anonymous
Spread the word ...