Prince charming and his sunshine 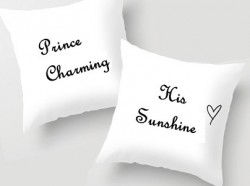 There was a time
There lived a prince charming
And there lived his sunshine.

They met once, they met twice
And it went on till it was "quince"
Just fifth and all had changed
Things had grown more "intense"
He came to pick her, oh so literally
She was nervous, he scared
For once it was going to be a proper "milan".

His slight touch made her stagger
He hugged her and her heartbeats quickened
He kissed her and her breathing labored
He smooched her and she couldn’t hold herself.

Next day, she had to go to a stupid function
And it delayed like too much
The few separated hours, the most difficult time “ever”
The laughs and the calls "away"
Everything seemed fake.

The night stroll on rickshaw together “unforgettable”
She in a traditional sari, he in a formal shirt
Like made for each other
Like no one else was there “in public”
"Jaisa filmo mei hota hai"
No rickshaw waala, no overlookers
Slight drizzle and holding hands together.

Just then, a lightning crackled
Like a pic perfect captured from heaven
Like this moment will never come “again”.

Entry to his palace stealthily added to the charm
With his royal family away somewhere
The courtiers in their own chambers
The palace all left to their demeanors
It was all “magic”.

They giggled, the place sizzled
Feeling like teenagers back “again”
Everything seemed real
There were many “firsts”
Love had blossomed
There was spring
There was rain, the “best” ever

She felt like cooing to him
But he already slept,
The creases of age all relaxed
Music in the background,
A perfect relaxed romantic background
The closeness relaxed her
First time both together
Like “this”, beside each other
Like the kind of pristine “love”.

Now, as she looks at the perfect pic
Like it didn't have “that” shine
Like some sparkle rubbed off
The emotions running high made everything seem a daze
But it was not a faze
It was just a memoir of all the things “yet” to come
For the sixth, seventh, eighth, infinite times of "Them"
JUST THEM!!