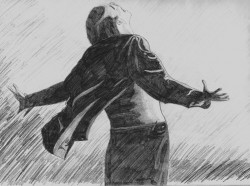 The sky looked perfect with its gloomy radiance as it bathed in the moon light. It drizzled only a few hours ago. The dark clouds were all gone as if they never were there. The chilly breeze was kissing his face with gentle elegance. He felt the calmness of the Universe and the presence of thousands of stars as he looked above. It was mesmerizing. The roof where he stood had nothing but a few flower vases with dry flowers waiting to be cared again.
‘I do not know what to say. I wish You are here with me.’, He broke the silence looking towards the heaven.
It was the day of redemption to him but he didn’t wanted any celebration. So letting his phone lie on the bed ringing, he took refuge in his favourite place. Apart from the nature, his eyes were also moist.
“CITY BOY MADE WESTBENGAL PROUD.”, the local newspaper read. He had secured the 1st place in the IAS exam.
But a few years ago, he was nothing but a lost soul. His world was limited by the closed high walls of the rehabilitation centre. He was an addict and a worse kind of one. He remembered the day when the van had come to take him to the centre. He had fought and abused the men. And then he begged to let him go. But all his pleadings were ignored as they sedated him and put in the back of the van. It was none other than his mother who had called the rehabilitation centre. She was also broken hearing her son’s cry but just about controlled herself and hid from his eyes.
The authority didn’t let him to meet his family for two weeks. He would scream and call names on the attendants and the doctors. He would bite, scratch or hit them while he tried to escape. But the compound was under cctv surveillance and the guards were always alert and strong enough to overpower and stop him. For the first few months, he hated them all and even his parents. He was denied of his drug…heroin. They forced him to take medicine and food, pushed injections from time to time to make him calm or sleep. His body was aching from withdrawal syndromes. Insomnia, headache and despair became his only companions.
The day when his mom first came to visit, he refused to meet her and acted violently. She started sobbing seeing him.
“ I hate you. You have put me in this hell. Dad never loved me. He loved Barun, his dear elder son. But you? You betrayed me , Maa.”, He yelled at her while the attendants put him away.
She used to come every day in visiting hours. On some days he would meet her, some days he would not. But she never stopped coming, even when her son blamed her and told not to come again. She would feed him home-cooked food and make him lie his head on her lap while she affectionately pressed his forehead. Mothers are the angels sent by the God, he understood that later.
He never met his dad or brother when they came once in a week. And as time passed on their visit became less frequent, but he didn’t care as long as his mom visited every day.
Then the divine smiled on him as his insomnia and headache were all gone. And after his attitude changed he was allowed to roam in the roof top garden and have interaction with other patients. There were patients of different ages and statuses. To his surprise, he found that most of them were teenagers. As they came to know each other and their bonding grew strong he realized he was not alone there. With their birthday celebrations and roof top basketball matches, he started to feel normal again. The regular yoga and meditation classes were not boring anymore. Even the lengthy psychological and motivational counselling classes were appealing to him. Books which he dreaded not long ago became his friends. Novels and Motivational books found place in his shelves.
The days were turned into weeks which were turned into months. 15 months after he was brought here the day of his freedom came. But it was not his mom who came to take him home. The news Barun gave him was even more shocking.
A few hours later he was in front of the ICU of the city hospital. His mother had a severe stroke. She didn’t survive. And in a moment his whole world turned upside down. The scream of his cry echoed the corridor.
As he looked at her face lying on the burning pyre of woods, he felt a void in his heart. A pool of unparalleled affection and love was gone from his life. The only person who never gave up on him left. But in his agony he didn’t turn to the dark paths again. As his dead mother and the fire as witnesses he had vowed, ”I promise you, the pain you have been through for me will not be in vain. One day I will make you proud, Maa. I will make you happy.”
Barun gave him his shoulders to cry on as the siblings watched their beloved mother to turn in ashes and begin her journey for eternity.