Smoking Kills(Strictly Not about Smoking) 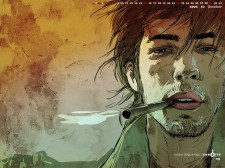 "You Bitch", he said as he cried.He cried his heart out. It was as if the whole world has melted into his eyes. The glacier of all that pain he had held so long came out. That puff of a cigarette did the trick. It was the first time he was smoking in his life. The only handkerchief he had was soaked and yet his eyes brimmed with tears. The stream wont stop. He stood their as the rain poured from the sky. Even the sky shared his pain. Everything was moist. The air which flew so briskly, the sand that lay still on the ground, the tree that wavered with the wind, the cigarette he held in his hand and his eyes, just everything that existed in that moment. That was the last time Vik cried. His heart went cold after all that incessant rain. He could feel just nothing. Numb! Numb to every emotion. Anger, love laughter or pain, he felt nothing.

A month after the treacherous night,the night when the girl he loved; loved more then his life; left him for someone else, he fell in love with another girl. It was love at first sight. It doesn't happen so often. Only in rarest of the cases but it happened to him. She was 'god's perfect creation' as he would say. Sitting in the canteen he would stare her day and night. Talking to her, was far way from his thoughts. All he wanted was to see her, breathe her and live her. The moment she would arrive till the moment she left. He would capture it in his eyes and then play it back again and again the whole day, until he had a new visual captured in his memories the next day.

Every song and every movie he saw, had her in the lead. He knew it was over. He was not numb anymore. He could touch, feel,smell. He could love finally, though with a smoky air he had inherited from his last love.And then after Five months of madness, the impossible happened.

"Hi", he said. The girl turned back in the direction from where the voice came. It was Vik.

"I always knew telepathy was a myth. But it took me five long months to realize the truth.So, here i am. Hi, I am Vik" , he said presenting his hand to her.

She was dumbfounded, but caught in the moment, she shook his hand and said "Hello, i didn't get you !".

"Don't worry you got me now!", he said with a flirtatious smile. It looked more like a grin, with a smoky feel and smell added to it.

Despite the repulsive smell of cigarette she managed to smile back. There begun the journey of Vik in search of true love. A journey which led all the way to love of his life, Radhika, he thought.

Radhika was a smart, beautiful girl who made a cute pout every time she was disappointed or distressed. Vik loved that pout of hers. He would act sympathetic every time she was annoyed or distressed but in his heart he cherished every moment that pout remained on her face. That little curl of her lips and distorted brows would bring out every hormone responsible for her beauty.

One day as Vik sat smoking and pondering about Radhika. She appeared out of nowhere and with anger, which brought the familiar pout, threw his cigarette away. Vik for the first time felt he didn't like her doing that. Even the pout didn't work its magic. May be it was the nights he had spent awake thinking about the journey to his love which was causing its toll.

He pulled out another cigarette and begun lighting it. It was then that a shrill voice fell on his ears.

"Don't you understand i want you to forget her. Quit smoking Vik. You don't have to do it anymore."

Vik looked back at her with a confused face.

"What the hell are you talking about", he questioned her.

What happened after that is a mystery as Vik's sense of hearing went awry. All he knew was, it was Radhika who stood shouting things at his face.

That was it, then the visual went away too. He walked out on her.

The journey wasn't over yet. The smoke rings for some years kept reading ' Break up!, Love, Break up!' Then some 5 years after the incident and after a long repertoire of breakup-love series, the smoke rings faded away. Vik quit smoking. He had lost patience and stamina. The will to move on the journey to find the true love was all that was left. The fear of loosing the will made him quit the cigarette.

It didn't take long before he met Meher! Meher stood holding an umbrella. A li'l small to hold the torrential rains of Mumbai. Distressed, with brows touching her forehead at two ends and a pout. It was the same pout the one Radhika had,Vik thought. And yet again he fell in love at the very first sight. It was third time for Vik when it had happened so. Although he had fallen in love a number of times. Well, he had actually developed a sense of falling for every other girl. But this was different, he thought.

He walked to her dripping in rain. It was a perfect evening it had excerpts of his other 2 special love stories. The rain was similar to the night of his breakup, yet so unlike. The air was moist, so was the sand yet it was pleasant. He could feel every emotion passing through his brain. The neurons that were

carrying the emotions to his brain seemed familiar yet so lively. And that pout felt so much like Radhika. Nostalgic he thought of her. She was not wrong, it was me who was a fool. He kept walking towards her. He promised to himself he would not let her go. Thinking all the time he didn't realize that he had been standing in front of her staring in her troubled eyes for a minute or two. 'Honk! Honk!'. The sound of passing Taxi brought him to senses and he realized she was smiling. He smiled back.

Monsoon set up a perfect stage for a blooming love story. Every rain pour set the cement stronger then before for their relationship. By the time it was winters Vik had made up his mind on her. He would finally propose her. He made a plan to surprise her by telling her he was leaving Mumbai for ever. Then as she would come distressed and puzzled to him, with that cute pout of hers. He would surprisingly propose her falling on his knees for the love of his life, Meher!

Things went as per the plan. On hearing about his departure she came to his house. But before he could say anything she proposed.

There was a long lull. The time stopped, everything stopped Meher stood,her hair went dead even the second hand of clock didn't tick anymore, but Vik moved. He felt things going heavy in his head. He

was not prepared for this. He felt a strong gush of emotions flow through his body. The same sensation of neurons the first time he had met Meher. But it didn't feel pleasant this time."Why?" So many question questions with a prefixed "why" burdened his brain. He needed a cigarette.

As the time stood still. He grabbed his wallet and hit for the road. He bought a packet of cigarette, lit it. Poof!! The hustle Bustle returned.The time started to move again. He kept walking dragging deeper in his cigarette. But his legs took him to somewhere else. He wasn't walking back to home. He had made peace with his mind. Had he? This was not love, he felt. He had actually begun to enjoy the journey.

The thought of finding the love of life was disturbing for him. He loved the journey, he loved the pursual. But he feared the goal. 'The end' wasn't meant for a soul like him

He took another drag, and smiled. He knew not what he had made of his life. But he was happy the way it was. "You Bitch", he said , though this time for the life.

Meher went back crying her heart out. She had her heart broken for the first time in life. Tears kept rolling out of her eyes, but she kept walking. The sound of honking horns, the flowing traffic, everything felt so irritating to her. It was raining, a bit weird for the time of year. Everything was moist the air, the sand on ground, the tree nearby and the cigarette in her hand.It was the first time she was smoking. Everything went Numb! Do you feel something? Or are you numb as well?