Ssshh! They Can Hear Us 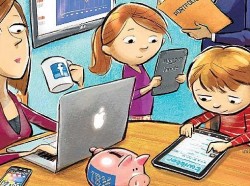 There’s been a lot of talk about extra-terrestrial beings visiting our planet.I don’t put much stock in that. I am convinced, however, that we are surrounded by sentient things of our own making whose single aim is the harassment of the individual, and, ultimately the destruction of the society.

Let me illustrate. A couple of years ago, I received a $600 insurance dividend. Sitting at the kitchen table, my wife and I discussed what we might do with the bonanza. I realize now that the refrigerator overheard us. The very next day, it went berserk. The repairman told us we needed a whole new unit. Cost : $600.

Not long after, we got a tax refund, enough to pay for a vacation in Mexico.
“I’ve something to tell you,” I told my wife. “Privately.”
“How about the study?”, she suggested. I remembered the new LED television is in there. “No,Not there,Let’s go outside.”
I showed her the cheque as we stood in the driveway.We hugged each other elatedly and hardly noticed the rain.
My car was parked within earshot. I didn’t think anything of it at that time.As I started for work the next morning, the car began making several devilish screeching sounds. “The engine’s worn out,”my mechanic said.”Replacing it will cost about a 1000 dollars.”
The car’s demise convinced me I was on to something big. I dug through our financial records. I discovered that over the past ten years our receipts of “found” money had invariably been followed by equal expenses to replace the water heater, the television and the stove.

Today, I lavish compliments on all the mechanical devices in our home. And I never, ever mention financial rewards in front of them.
But if this article is published, and I get paid for it, the laptop is gonna break down for sure. It’ll know.