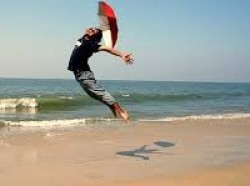 There is a boy who works hard. There was a boy who parties hard. What is the difference between these two boys? One works hard and other enjoys. Now the question is who is happier?
Can we define happiness, no? We can’t, everyone has his/her own perspective about the happiness. One who works finds success one or the other day and other won’t. So it doesn’t mean that partying is bad. It is bad when it gets worse.
He used to be the topper of the class. Mathematics was his favourite. He was told to study each and every day. He didn’t play outdoor cricket with his friends. He just watched them play. He scored 99 each year. His parents were proud, so were his teachers. But when he was given to handle a bat, his hands used to shake.
Eventually he feared that something has happened to him. But that was a fear, fear of mind. He was alright. He wanted to hold that bat; he wanted to learn how to hit a ball with that bat. He had no friends, but he made a few. It was a bargain for doing homework. He learned to bat with those kids. He played every day in the evening hiding from his mother.
He practiced every day. Studies meant less and he knew that he wanted to be a batsmen. Fourteen years later he debuted as an international cricketer and I am not going to reveal his name.
What do we learn from this? Happiness is finding what you love. Few days ago I read a status of a boy in Facebook. In India any child who wants to be anything other than an engineer or a doctor is considered as terrorist, I am film maker. It is funny but true. An engineer, doctor, chartered accountant, or a MBA may earn lakhs. But, what about living your life?
~~~
Money must be sufficient not superfluous. Some simple things make us happier than some luxuries.
We run for acceptances, we expect. Life is bitter when those expectancies don’t turn real. LEAST YOU EXPECT MORE YOU ARE HAPPY.
We date and we love, everyone needs a soul mate, we change for him or her. We groom, we change our styles just to be accepted. But we forget how much we are wasting our time trying to be someone who we are not. Love is about accepting as it is.
EVER TRIED LOVING YOURSELF? EVER TRIED PROPOSING YOURSELF? JUST SAY I LOVE YOU TO YOURSELF!
DO IT!
THIS IS JUST THE FIRST STEP 

DR SACHIDANAND DAS
Good.
October 4th, 2014
JYOTI GUPTA
I love myself :-)
October 4th, 2014
DR SACHIDANAND DAS
I have not come across any one who does not love himself/herself.
October 5th, 2014
ANKITA AGARWAL
Tats true Mr. Dad. Everyone love himself more than he love others:-)
October 6th, 2014
DR SACHIDANAND DAS
That is true Ms. daughter.
October 6th, 2014
Author
Thank you all for your responses
October 9th, 2014
PAAGAL
@author : there are lot of people who don't love themself. they do everything for someone. Ask you mom or dad ...they love their son more than themself. Ask a person who is married not necessarily everyone ? But a faithful lover , they love their lover more than themself ......
October 9th, 2014
DR SACHIDANAND DAS
Others mean outside your family or those with whom you may have special relationships. It means the entire humankind.
October 9th, 2014
Author
@PAAGAL....that is true,,,but whats written is point that you need to understand is that i am suggesting only those who are fed up,,,,,who are pretending :)
October 10th, 2014
Login to comment
2   ·   9 feedback ( rating and remark )
You can also write on WriterBabu. Know More.